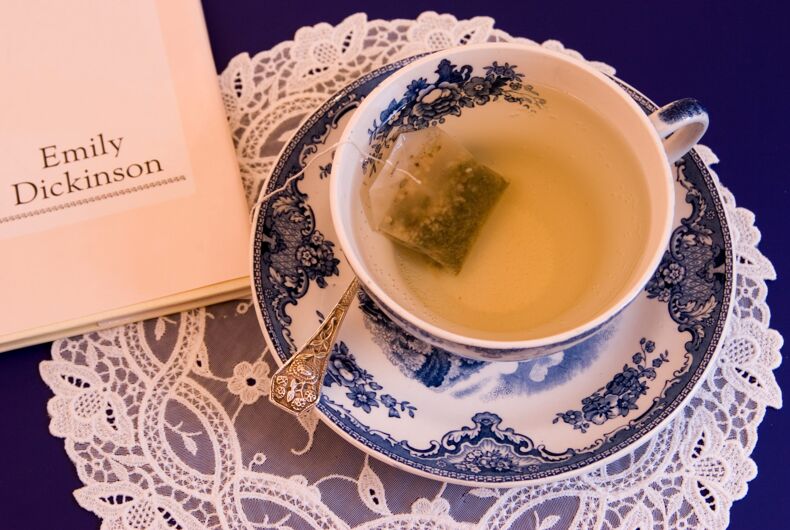 Our high school English teachers generally portray poet Emily Dickenson as a relatively unsociable recluse who rarely strayed from the protective shelter of her beautiful Victorian house in her beloved Amherst, Massachusetts.

Many literary historians touch upon what they judge as Emily’s innocence in the intimate acts of romantic and sexual physical touch. The relationships she developed and maintained, they claim, she attained through personal correspondence.

Related: Susan B. Anthony was a lesbian hero but they don’t teach you that in history class

The 2018 feature film Wild Nights with Emily, though, shatters the apparent myth of this Bell of Amherst’s inexperience in matters sexual. Written and directed by Madeleine Olnek who based her screenplay on the actual handwritten letters and poetry of the great wordsmith, the film challenges conventional thinking and mere speculation of the personal life of Emily Dickenson.

This biographical comedy starring Molly Shannon as Emily explores her life as a young writer through her later years attempting to find a publisher for her poetry. It depicts her sometimes playful, sometimes irreverent side as she develops a budding and continuing romance with Susan Gilbert when both are in their teens. They meet as actors at the Amherst Shakespeare Society playing lovers on stage.

Susan obtained a teaching job further west, and they write to each other numerous love letters while she is away from Amherst. When she returns, Susan announces that she is to marry Emily’s brother, Austin.

Thunderstruck, Emily feels hurt and betrayed, though Susan commits her undying love to her friend and lover. Susan explains to Emily that the marriage is only for financial considerations as women in the 19thcentury, especially those of inadequate means, have few options.

Though Susan demands chastity of her betrothed, the couple gives birth to two children, a daughter and a son. They eventually construct and move into a great Victorian home directly next door.

Quite possibly stemming from the lack of physical passion in the marriage, Austin takes a lover, Mabel Todd, whom Emily previously invited to her home to play the piano for her. Mabel, however, never comes face-to-face with the poet. The housekeeper explains to Mabel that she is to play alone in the music room while Emily listens one flight above in her bedroom.

Some years later, at Emily’s death, her sister Lavinia finds a large chest filled to overflowing with Emily’s handwritten poetry and love letters. Lavinia discloses the treasure to Austin and Mable, the latter who knows people in the publishing world. Following success in publishing Emily’s first book of poetry, Mable has the idea of also having her group of letters published for the public to read.

Believing that people would misunderstand (or more correctly, fully understand) the true intentions of the letters, Mabel solicits Austin’s help in literally erasing all mention of “Susan” and replacing these with the names of men.

Many decades later with the aid of imaging technology, scientists and historians uncovered the imprints of the true intended recipient of the letters.

As wisely and eloquently stated by English author Edward Bulwer-Lytton in his 1839 play, Richelieu; Or the Conspiracy, “the pen is mightier than the sword.” The written word acts as a powerful tool in the transmission of ideas. Why else would oppressive regimes and enforcers of the status quo engage in censorship, book bans, and burnings throughout the ages?

A form of cultural imperialism of LGBTQ people is that they often grow up within an oppressive society depriving them of a historical context for their lives. The larger society perpetuates the myth that they have no culture and no history, and that they do not constitute a bona fide community.

Our histories are intentionally hidden from us by socially dominant individuals and groups as a means of perpetuating and enhancing hegemony. This process describes the ways in which the dominant group successfully disseminate its form of social reality in a manner that is accepted as “normal,” even at times by those who are themselves marginalized by it.

Historian, John Boswell, has documented various means this has been enacted to erase LGBTQ people and history. These actions not only lead to the false conclusion that LGBTQ people have made no significant contributions to their societies, but also furthers isolation and invisibility.

Boswell cites as an example of heterosexist censorship a manuscript of The Art of Love by the Roman author Ovid. A phrase that originally read, “A boys’ love appealed to me less” (Hoc est quod pueri tanger amore minus), was altered by a Medieval moralist to read, “A boy’s love appealed to me not at all” (Hoc est quod queri tanger amore nihil), and an editor’s note appearing in the margin informed the reader, “Thus you may be sure that Ovid was not a sodomite” (Ex hoc nota quod Ovidius non fuerit Sodomita).

One of the first instances of a change of gender pronouns occurred when, as Boswell stated, “Michelangelo’s grandnephew employed this means to render his uncle’s sonnets more acceptable to the public.”

We know about the figure of Sappho and her famed young women’s school on the Isle of Lesbos around the year 580, where we find the earliest known writings of love poems between women and other important writings.

Unfortunately, only one complete poem and several poem fragments survive for us today after centuries of the Catholic Church’s concerted effort to extinguish the works of these extraordinary women. St. Gregory of Nazianzus demanded the torching of Sappho’s poetry in 380, and the remaining manuscripts were ordered to be destroyed by Papal Decree in 1073.

Poet Walt Whitman’s book Leaves of Grass was published in 1860. The section titled “Calamus” was clearly homoerotic. Kalamos in Greek mythology turned into a reed in grief for his young male lover, Karpos, who drowned.

The Acorus calamus is the name given to a marsh plant. For Whitman, his “Calamus” poems represent the kind of love between Kalamos and Karpos. Very soon following the book’s publication, it was removed from library shelves at Harvard University and placed in locked cabinets with other books thought to undermine students’ morals. Whitman was fired from his job at U.S. Department of the Interior.

Radcliffe Hall’s 1928 novel, The Well of Loneliness, involved a lesbian relationship, but soon after publication it was declared “obscene” by officials in both England and the U.S., and was banned.

Stormtroopers carried away and torched thousands of volumes of books and research documents calling the Institute “an international center of the white slave trade” and “an unparalleled breeding ground of dirt and filth.”

For LGBTQ people and allies, the inclusion of this information can underscore the fact that their feelings and desires are in no way unique, and that others like themselves lead happy lives. This, in turn, can spare them years of needless alienation and suffering.

The weirdest part of traveling the world? Strange toilets.