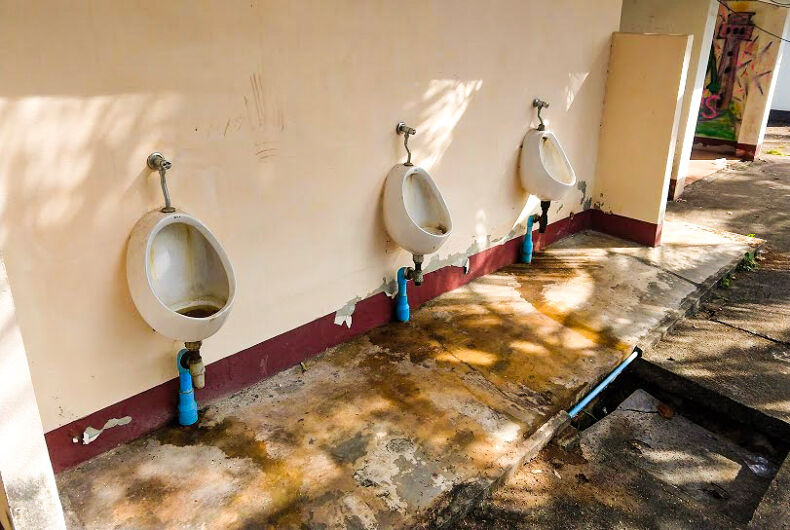 Sometimes the facilities are not up to Western standardsPhoto: Michael Jensen

We’re digital nomads, a longtime gay couple with no permanent home. We work online, which allows us to travel to different countries where we usually live for several months at a time. We’ve traveled all over, from Central America, to Eastern Europe, to Asia …  and boy, have we seen a lot of crazy toilets!

Related: This toilet paper commercial has a surprise gay twist & conservatives are crapping themselves

It took us a while to get used to bidets in Europe — and then we absolutely loved them, like everyone who has never used bidets regularly — why doesn’t America have bidets?!

In Eastern Europe, many toilets don’t have seats, just a bare rim. WHY? We do not understand this! How in the world are you supposed to sit?

In Italy, sometimes poor people steal the toilet paper out of the stalls and then try to sell it back to you when you enter the restroom.

In Mexico, the sewage systems can’t handle toilet paper, so rather than flush it, you have to put it in a covered bin next to the toilet.

In most of the world, there’s usually a fee to use a public restroom, and it’s especially annoying when they require exact change. That said, in fairness to the rest of the world, the cost is usually only five or ten cents, and because the toilets are monitored, they’re usually a lot cleaner than American restrooms.

Of course, you hear the worst horror stories about bathrooms in poorer Asian countries. Once we decided to travel there ourselves, this caused us a fair bit of anxiety.

“You’ll be fine,” our digital nomad friend Casey told us when we were planning our trip to Asia. “It’s not what you think.” But she sleeps in tents on the African savannah and wakes up to rogue rhinos. We were skeptical about her advice.

Sure enough, in most of Vietnam and Thailand, the toilets were fairly or very modern, like anything you’d see in America or Europe, although, as in Mexico, the plumbing systems can’t handle toilet paper, so a covered bin is provided inside each stall.

But in Asia, they often also provide a hose next to the toilet, which is used as a bidet. Toilet paper is used for drying purposes only.

Yes, we saw a number of the infamous “squat” toilets, which are basically just a hole in the ground. But hey, sometimes they had footrests! These were mostly found only in the countryside and, yes, unfortunately, also in public parks.

The absolute worst-case scenario? A squat toilet with no hose, just a bucket of water and a plastic cup, which is used both to “flush” the toilet and also clean yourself (with your left hand, just FYI). Also, there are no stalls… and no toilet paper.

We did see toilets like this, and yes, our lives did briefly flash before our eyes. For one thing, who carries their own toilet paper? Well, we do now, whenever we’re in Asia. But who wants to?

Thankfully, in every case, there was at least a restaurant somewhere nearby where the facilities were much better. So if necessary, we could buy a 20-cent soda, and we were soon good to go. The very few times we were somewhere so remote that there wasn’t even a restaurant nearby, it was okay because we didn’t have anything in the way of a viewing audience anyway.

Then one day in Thailand, the two of us were catching a boat to a nearby island. The boat was leaving soon. It was a long trip, and there was no bathroom on the boat, so we dashed over to use the restroom first.

It was in a city park. The bathroom was outside — though in fairness, there were some screens around the holes in the ground. The “men’s room” was a row of urinals attached to a wall. Fortunately, the wall was facing away from most of the park itself, so you weren’t necessarily flashing children.

We were relieved this was a Number One situation for both of us, not Number Two. Anyway, we stepped up and started doing our business.

And suddenly we felt something dripping between our legs, splashing onto our shoes, which, of course, were sandals, because that, or flip flops, is all anyone ever wears in Southeast Asia.

The urinals weren’t hooked up anything! Your pee simply dripped down through a pipe in the bottom of the urinal, then ran down through your feet into a concrete trench behind us.

And we started laughing. We couldn’t help it! We thought it was hilarious. (We posted pictures on Facebook, but people weren’t amused. Waaaaay TMI!)

But it was also a moment of epiphany — at least once we spread our legs wider and weren’t peeing on our sandals anymore. It was at this exact moment that we realized our anxiety about foreign bathrooms was ridiculous. We’d just landed a mental leap.

Everyone does poop, and that is absolutely nothing to be ashamed or embarrassed about. There’s no place in the world where there are no bathrooms (although, sadly, thanks to biology and sexism, women really do have a worse time of it pretty much the world over).

Wherever you are, however they do it, that’s the right way to go about it. Not accepting that makes as much sense as refusing to even try chopsticks in China. And accepting it really does broaden your mind. As with chopsticks, it’s easier than you think, and you’ll be a slightly more interesting and open-minded person once you’ve mastered it.

Okay, so our bathroom epiphany didn’t transform us into completely different people. We still travel with anti-diarrhea pills, chewable Pepto-Bismol, and charcoal tablets, which supposedly combat food poisoning by soaking up the toxins in your stomach — we have no idea if there’s any scientific basis to this, nor do I want to know; we simply like having options, and a feeling of control, whenever something doesn’t feel quite right down below.

The real takeaway here? Our friend Casey was 100% right: The only thing anyone has to fear about foreign toilets is fear itself.

That and sometimes pee dripping onto your shoes.