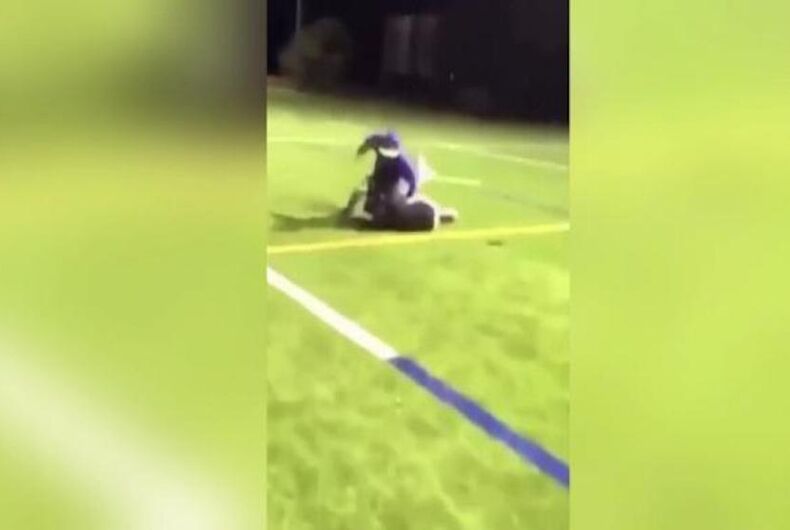 A transgender teenager was viciously beaten on video by a fellow classmate from Alpine, Texas’ Alpine High School. In the video, which has since gained thousands of views, the perpetrator can be seen pushing the victim to the ground and repeatedly punching him in the face.

The victim, who chose to remain anonymous, told CBS7 News, that the attack “came out of nowhere.” He and his friends were hanging out at the Sul Ross State University football field when the attacker approached him, cussed at him, and began beating him while two of the attacker’s friends looked on and laughed.

Related: Man attacked a gay couple in front of their parents before attacking a waitress

The attacker has yet to face any consequences. According to the Alpine Independent School District superintendent, Becky McCutchen, the school cannot take action unless the police arrest the perpetrators, since the attack happened on a weekend and away from school grounds.

“We have done everything we can to ensure the safety of all of our students,” she said. “And never would we condone something of that manner.”

Here is video of the attack:

The victim says the problems go far beyond this one incident, though, and extend into the school hallways.

“I had kids pretty much saying that I deserved to be dead and that he should have killed me,” he said.

Equality Texas sent out an email to supporters urging them to take action in support of the victim:

Alpine ISD Superintendent McCutchen said that her hands were tied because the attack didn’t take place on school property or during school hours. But we know that an inclusive school environment and enumerated anti-bullying policies can help set the tone for student behavior both inside and outside a school’s doors.

The school district can send a message to the community that anti-LGBTQ attitudes and actions will not be tolerated by them. You can send a message to Superintendent McCutchen and all members of the Alpine ISD School Board right now asking them to take steps to support their LGBTQ students and create a safer school environment.

The email then linked to a page that allowed people to contact the school urging them to create a safer, more inclusive environment for LGBTQ students.

The victim’s mother also spoke out, saying, “All that bullying, it just needs to stop. They just push it to the side, they brush it to the side like nothing’s going on, but something is going on. That’s why all these kids are getting hurt. They’re taking their own lives.”

The 2015 U.S. Transgender Survey found that 54% of respondents reported being verbally harassed while in grades K through 12. Additionally, 24% reported being physically attacked in school, and 13% reported being sexually assaulted due to their gender identity. Approximately 17% reported leaving school due to severe mistreatment.

The victim is planning to file a lawsuit against the perpetrators of the attack, but in the meantime, he continues to fear for his safety.

“It’s definitely gonna happen again,” he said. “I wouldn’t be surprised if it did.”