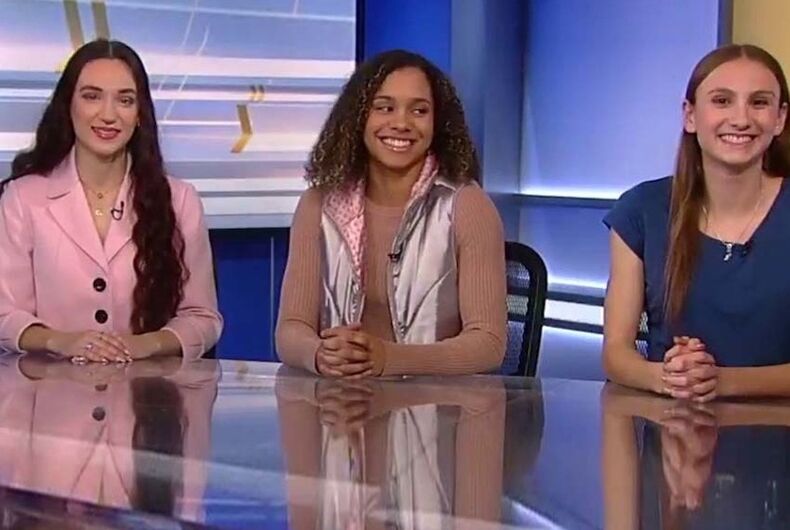 The Connecticut Republican Party is granting its Courage Award to three high school runners who are suing to prevent transgender athletes from participating in girls’ sports.

Chelsea Mitchell, Alanna Smith, and Selina Soule have been working with SPLC-designated hate group Alliance Defending Freedom to block transgender athletes from competing against them, claiming that trans athletes have an unfair advantage over their cisgender competitors, ruining their chances at sports scholarships.

In February, the girls filed a lawsuit against the Connecticut Interscholastic Athletic Conference as well as several school boards of education. The lawsuit refers to trans female athletes as “boys” and claims their participation is a violation of Title IX of the Education Amendments of 1972, a federal  law that prohibits sex discrimination. Their lawsuit says trans-inclusive sports policies lead to “displacing girls.”

Mitchell, Smith, and Soule will receive the Courage Award at a March 25 fundraising event honoring women in leadership roles.

“We think in today’s day and age these young women standing up for what they believe should be honored,” J.R. Romano, chairman of the Connecticut Republican Party, told the Hartford Courant.

In a tweet, the Republican party referred to the students as “three brave girls who are leading the charge to save women’s sports!”

Join us as we honor these three brave girls who are leading the charge to save women’s sports! Reserve your ticket today or send your support in the program book. Click: https://t.co/asuulIEv4v#Girls #Sports #CTPolitics #TransgenderAthletes @IngrahamAngle @realDonaldTrump pic.twitter.com/DhYAdbibfU

“It’s beyond shameful that J. R. Romano and the Connecticut Republicans would use high school students struggling with a complex and highly personal issue to raise money. Whatever your beliefs, we’re talking about the lives of teenagers. If the Republicans really cared about these young people, they would never make this a money issue. Are there any boundaries left that the Republican Party won’t cross?”

Transathlete.com shows Connecticut as one of seventeen states that allows athletes to compete with the gender with which they identify without requiring them to have undergone any surgery or hormone treatments.

Stonewall, anyone? Pete Buttigieg blasted for his criticism of 1960s “revolutionary politics”