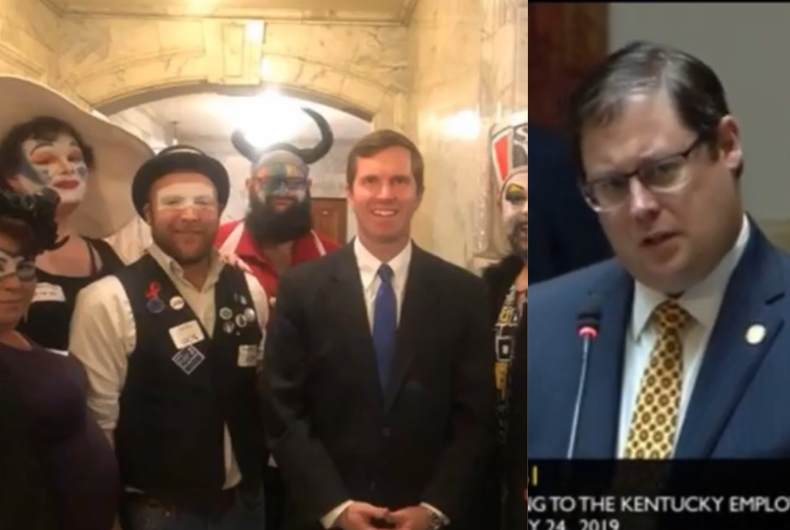 During his speech at a campaign rally last week, Wheeler had pictures of Andy Beshear – a Democrat – passed around, in which the Governor posed with members of a ‘dragtivist’ troupe in the State capitol, some in drag and makeup. Wheeler said of them, “when you come in here with clothing and outfits that are just way out there, I have a problem with that. I think we expect a certain amount of decency and decorum in our capitol.”

Wheeler continued, telling the crowd at the rally, “even when I was a young man, that kind of stuff just didn’t fly. Now it seems like it’s everywhere…these are the values that the Democratic Party of today is out there trying to convince our children is the right way to live.”

Now, officials in the state are calling for Wheeler to resign. “It’s time for Phillip Wheeler to go,” Marisa McNee, spokeswoman for Kentucky Democrats said in a statement. “He’s an embarrassment to the Commonwealth of Kentucky, and his hateful, ignorant comments do not have any place in the Statehouse.”

Those photographed with Gov. Beshear were members of the Derby City Sisters, the Louisville charter of the Order of the Sisters of Perpetual Indulgence – which was formed in the 1970s and was one of the first organizations to produce LGBTQ safe sex pamphlets. They also issued a statement, challenging Wheeler and White to meet with them before judging them “without knowing us, just to score political points.”

“We are a nonprofit, who seeks to let everyone know that they are loved and that they belong. We advocate for those without a voice. We are dedicated to community service, and we humbly promote human rights and respect for diversity. So gentleman, would you like to actually get to know us before you judge us?”

By now, a lot of you have seen the attached article floating around.I would like to offer a sit down to Rep. Richard…

Wheeler has since attempted to clarify his speech, claiming in a series of tweets that he has “no animosity toward LGBTQ individuals, and I denounce discrimination against anyone on the basis of sexual orientation.”

He followed that up, however, by declining the Derby City Sisters’ offer and claiming he “strongly oppose[s] any group that mocks or degrades religion or members of clergy.” He further refers that his comments were because of one member’s wearing of a KFC bucket-turned-nun’s habit, and another’s wearing of horns “to depict the devil.”

“I’m not about policing fashion, but I am about promoting decency and encouraging decorum,” he explains.

Further, Wheeler props up a gay relative as proof that he is not homophobic or anti-LGBTQ in any way. He also announced Thursday that he has no intent of resigning.

I respect the rights of all Kentuckians to visit our State Capitol and to be active participants in the affairs of our state government.

However, I strongly oppose any group that mocks or degrades religion or members of clergy and others for their deeply held religious views.

or horns on his head to depict the devil. I’m not about policing fashion, but I am about promoting decency and encouraging decorum.

We should respect all Kentuckians instead of embracing those who degrade and mock religion. pic.twitter.com/pHhM0P2bl0

In place of a resignation, Democrats are asking for the State Senate to censure Wheeler.

The Lexington Herald-Leader also reports that when pushed on his supposed support of the LGBTQ community, Wheeler would not commit to supporting a “long-proposed bill to protect LGBTQ Kentuckians from discrimination in housing and employment,” as he had not yet read the bill.

Gov. Beshear responded to Wheeler’s comments, saying that the senator’s initial remarks were “absolutely homophobic” and “I believe he owes each and every one of (the people in the photo) an apology. They’re as much Kentuckians as anybody else.”

The event that the photograph came from was on Feb. 19, when Beshear became Kentucky’s first sitting governor to take part in a Fairness Campaign, an annual pro-LGBTQ rally. There, Beshear denounced conversion therapy and spoke in favor of passing an LGBTQ rights bill.

“Discrimination against our LGBTQ brothers and sisters is absolutely unacceptable in this commonwealth,” he said at the event.

Rep. White’s seat is considered very important for Democrats in the state. Despite holding the seat of governor, Kentucky has a Republican majority in the state Senate and House of Representatives.

Wheeler himself won his seat in a special election in March 2019. His seat is up for election again this November.