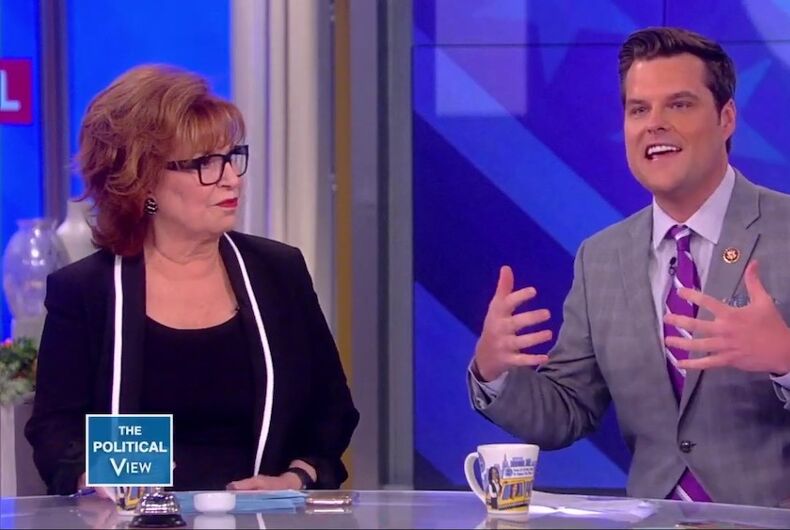 In an appearance on The View, Congressman Matt Gaetz (R-FL) claimed both he and President Trump support the participation of transgender people in the military — despite the fact that it was Trump himself who introduced the trans military ban in July 2017 and the fact that Gaetz publicly supported the ban.

On The View @RepMattGaetz claims that he and Trump "are not the kind of Republicans" to ban transgender people from the military?? 😊🔨 pic.twitter.com/UoFY8mJwev

In response to Trump’s 2017 announcement that he planned to ban trans military service members, Gaetz tweeted, “This is the right thing to do!”

This is the right thing to do! https://t.co/mqypAtwtH9

Trump announced the ban in a series of tweets, claiming transgender service members lead to “tremendous medical costs and disruption.”

In 2019, USA Today reported that medical treatment for trans servicemembers over a period of three years amounted to about 0.00001% of the military’s overall budget for one year.

Referring to Gaetz as “gaslighter-in-chief,” Pink News also pointed out that he backed an amendment to a government defense funding bill that, had it passed, would have prevented Department of Defense funds from being used to provide medical treatment related to gender transitions.

Gaetz also voted against the Equality Act. The Equality Act would have, among other things, added sexual orientation and gender identity to the Civil Rights Act of 1964 and the Fair Housing Act, guaranteeing federal protections for LGBTQ people in housing, employment, public accommodations, credit, and other areas. However, Republicans in the Senate have ignored the bill.