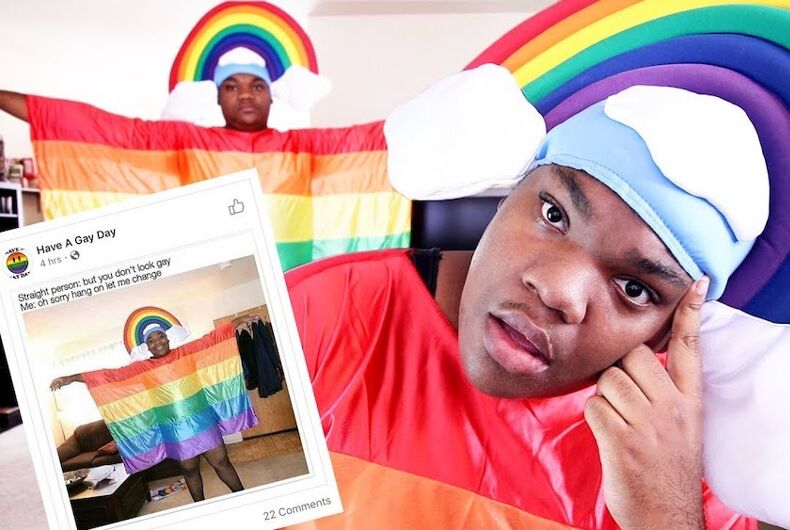 Sometimes you want videos made by people just like you. That’s why we’ve curated this list of 10 excellent Black gay YouTubers whose videos are fun, inspiring, eye-opening, and add a much-needed dash of queer color to the video-sharing platform.

Our so-called list of Black gay YouTubers includes some trans, bisexual, and lesbian vloggers too. We also tried to include folks who have sizable subscriber bases, a good backlog of videos, and newer content. So if you like what you see, remember to subscribe, comment on, and share their work to help keep these Black gay YouTubers and other queer vloggers online.

Related: Tré Melvin is still the King of Black YouTube

One last note: This list of Black gay YouTubers is by no means comprehensive. There are many other Black gay YouTubers and LGBTQ vloggers out there creating quality work. So if we passed over one of your favorites, please mention them in the comments so we can check them out.

While Taylor has a smaller audience and lower production quality than some of the Black gay YouTubers mentioned on this list, Taylor is still charmingly authentic and one of the few trans-masculine and gender-fluid YouTubers on this list. Their intimate videos on mental illness, American Sign Language, and musical theatre create a relatable, endearing profile of New York City queerness.

Mainstream cosmetics aren’t often made with Black skin in mind. So any Black men into makeup will likely love U.K.-based cosmetics expert Gary Thompson. His weekly how-to tutorials on beauty, skincare, and new products have made him a  face of modern male cosmetics with sponsorships to boot. He is also the only Black gay YouTuber on this list who focuses specifically on beauty.

Any gay Black YouTuber can rattle off personal anecdotes, relationship advice, and pop-culture criticism. But Jade Fox’s comedic wit, animated expressions, and open heart make her videos feel like spending time with a best girlfriend. She’s very funny while offering candid takes on the world around her.

This transgender YouTuber regularly discusses trans issues, adding her own intelligent and personal twists. She often examines trans cultural issues by sharing her own personal experiences (or “True Tea” as she calls it) and will view issues through an intersectional lens that addresses gender, race, and other political identities. These make her takes on body positivity, polyamory, and social justice feel refreshingly current and well-considered.

LeeLee & Gramz aren’t just two gay Black YouTubers, they’re also one of the most popular Black queer couples on YouTube, period. Documenting their lives together with humor and authenticity, their videos about shopping, going to church, and hanging at home highlights the special intimacy hiding behind the mundane day-to-day moments that all couples share.

Even though Senegal and “The Plastic Boy” Gary Thompson are both gay Black YouTubers who focus on beauty, Senegal is different because he also shares personal stories about love, travel, and city life — all served with ample sides of humor, mugging, and shade.

Octavia Outlaw is the only cis female beauty influencer on this list of gay Black YouTubers, but she’s also so much more. She focuses on everything from everyday essentials, like bikinis and wigs, to her high-end international vacations and plastic surgery. She also gets reals with videos about her relationships, mental health, and past work as an exotic dancer.

Machiazelli Kahey’s animated physical comedy, self-effacing wit, and rapid-fire editing make hilarity out of even the dumbest things. You’ll laugh out loud as he makes a sandwich blindfolded or tries “sexy” costumes purchased from cheap websites — it’s no wonder he occasionally tours and once worked with Buzzfeed. More serious queer viewers might appreciate his takes on racist YouTubers, conversion therapy, and anti-gay advertising that are insightful yet still very funny.

Zoie Fenty is a gay Black YouTuber who publishes comedy videos as well. But while he riffs off of his friends, relatives, and other social media users, his humor comes from his animated reactions and light-hearted reads rather than making others the butt of his jokes. He also appeared in two seasons of MTV’s improv show Wild ‘N Out and was one of the show’s only out gay cast members.

Eva Marisol Gutowski is Puerto Rican, black, Polish, and bisexual. She’s also been amassing her small nation of YouTube subscribers with since 2012 with personal looks into her own fashions, beauty secrets, fitness tips, food recommendations, and home decorating. Her videos are beautifully shot and edited with a professional polish that’s likely to catapult her into big-time stardom.