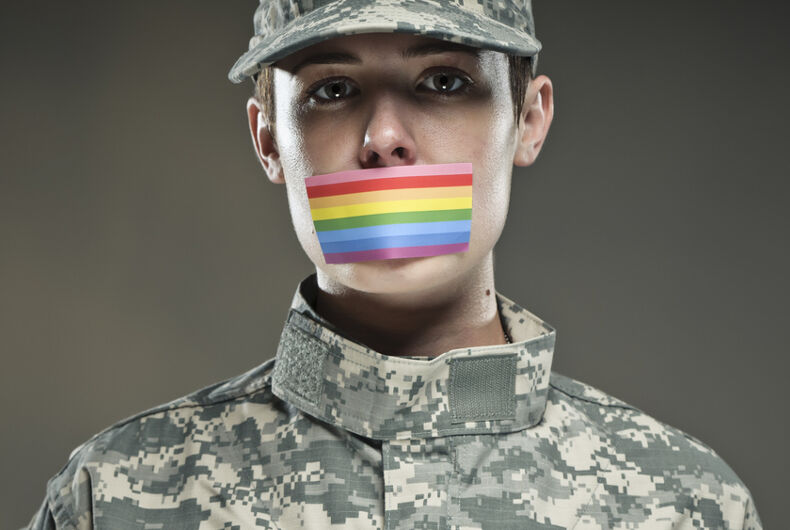 The final bill does have language encouraging the military to grant waivers allowing trans soldiers to enlist despite Trump’s ban and a provision helping LGBTQ soldiers kicked out under “Don’t Ask, Don’t Tell” (DADT) to fight for “honorable” discharges on their official records, facilitating their access to federal veteran benefits.

The Democratic-led House had approved an NDAA amendment introduced by Rep. Jackie Speier (D-CA) that would’ve ended Trump’s trans ban and, for the first time ever, prohibited anti-LGBTQ and other discrimination in the military.

But in a public statement, the National Center for Transgender Equality, the Human Rights Campaign, Lambda Legal, the National Center for Lesbian Rights, and GLBTQ Legal Advocates & Defenders joined the American Civil Liberties Union (ACLU) and the Modern Military Association of America to say that Republicans successfully gutted that language from the final NDAA.

The groups call it “unconscionable” that thousands of honorably serving transgender service members will continue to have their lives and families destabilized by Trump’s biased ban which is opposed by a majority of American citizens “military experts, and elected officials across the political spectrum.”

Despite this, the NDAA has a provision clarifying that LGBTQ service members who were dismissed under DADT and who were denied an “honorable” upgrade to their discharge papers can “seek an appeal under current law or defense policy.” The NDAA also encourages the military to let trans people enlist by granting them exception waivers.

But so far, no such waivers have ever yet been granted, raising doubts as to whether they’ll ever be issued, even with this new NDAA’s encouragement.

When Trump issued his July 2017 ban via Twitter, he said it was because of “the tremendous medical costs and disruption that transgender in the military would entail.” His announcement came a year after reports that the Pentagon had lifted the ban on transgender service members.