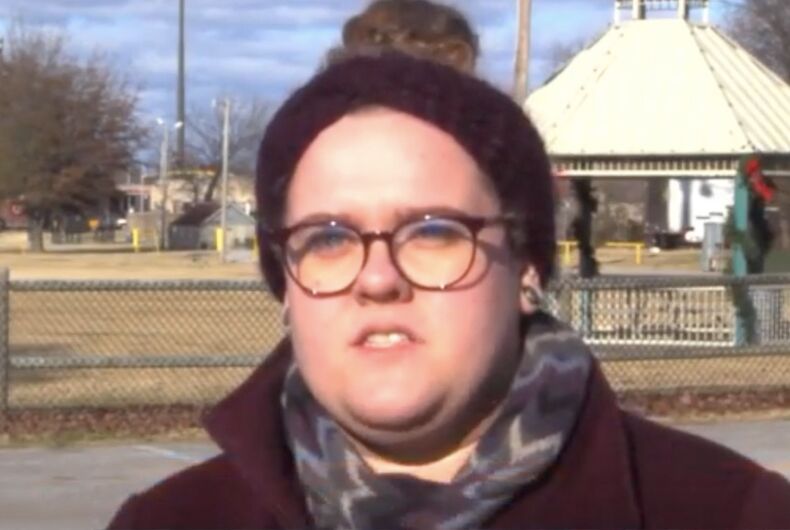 Lola Rose, a 21-year-old transgender woman who was once the manager of a Glenpool, Oklahoma Starbucks, says the coffee chain fired her as a scapegoat after one of her employees anonymously printed “PIG” on a label for five coffees and a blueberry muffin ordered by a police officer during her store’s Thanksgiving Day “rush hour.”

Rose had worked for nine months as a manager and said the officer laughed off the incident. But when the officer’s supervisor, the Kiefer, Oklahoma chief of police Johnny O’Mara, complained about it on Facebook, the chain fired Rose.

Related: A trans Starbucks employee was misgendered on the job. Starbucks says it isn’t harassment.

Now she’s unemployed, no longer has Starbuck’s health insurance or college assistance, and has to pay out-of-pocket for her school and hormone therapy while seeking a new job.

Rose said she caught the label on the muffin in the store and apologized to the officer involved, replacing the label with a corrected one and thanking him for his time and service. She also confronted the employee involved — who she believes was trying to play a prank on another employee, by getting them to say “pig” out loud in the store while a police officer was there — and told the employee such “jokes” weren’t acceptable. But she didn’t see that the officer’s other coffees had the same label on them.

When O’Mara called Rose’s store to complain, she offered to allow officers to come and get whatever food they wanted from her store free of charge, but he wasn’t satisfied. Instead of complaining to her supervisors, O’Mara blasted Starbucks on Facebook.

He wrote, “What irks me is the absolute and total disrespect for a police officer who, instead of being home with family and enjoying a meal and a football game, is patrolling his little town.”

He said that the Starbucks cup was a sign of “the destruction of the social fabric”: “This cup of coffee for a ‘pig’ is just another little flag. It’s another tiny symptom and a nearly indiscernible shout from a contemptuous, roaring and riotous segment of a misanthropic society that vilifies those who stand for what’s right and glorifies the very people who would usher in the destruction of the social fabric.”

Soon after, Rose was fired over the phone just as she was on the way to get a money order to move into her first apartment.

“I really feel like I was made out to be a martyr,” Rose told The New York Post, referring to how she was the sacrificial lamb. “This is a lot of slander [against me], a lot of brushing me under the rug.”

After firing Rose, the company released the following statement: “The Starbucks partner who wrote this offensive word on a cup used poor judgment and is no longer a partner after this violation of company policy.”