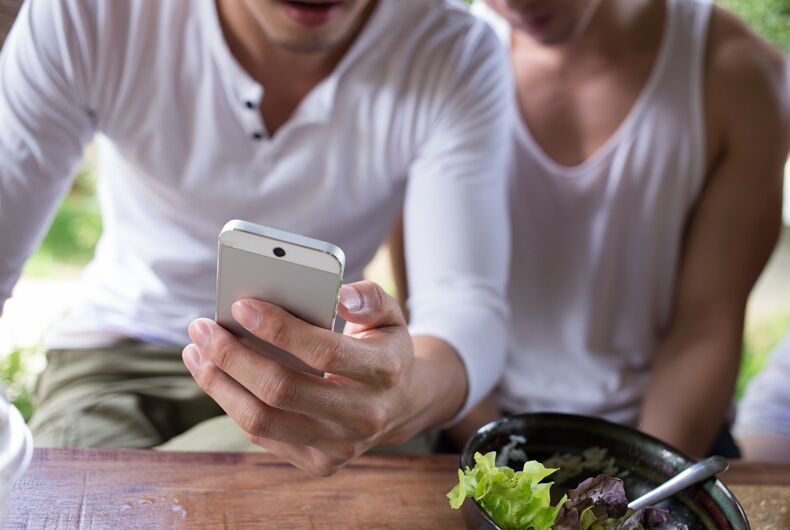 A gay man’s response to his father’s homophobic comments has gone viral on Twitter.

Reid Chandler visited his family of origin for Thanksgiving. He says he came out to his family eight years ago, and his brother came out to them during the visit.

Related: The advice this 1950s dairy farmer gave to his gay son will make you cry

The brother’s coming out, though, was “tougher.”

According to Chandler, while driving them to the airport their father said, “Don’t take this the wrong way, but it makes me and your mom feel like we’ve done something terribly wrong as parents.”

A week later, he sent a response by text, which he shared on Twitter.

He addressed the “don’t take this the wrong way” part.

“How do I not take that the wrong way?” Chandler wrote. “Essentially you are saying that me being gay is a result of terrible parenting. That this is a pestilence we were cursed with. That I am a curse.”

“Imagine a parent telling their straight son he is a mistake. How wrong does that sound? That’s how you sounded to me in the car.”

Chandler also addressed one of the biggest excuses people use to defend their anti-LGBTQ attitudes: that their religion forces them to do bad things.

“The belief system you and mom were raised on are not mine or Layton’s responsibility to tiptoe around or be sensitive to,” he wrote. “Whatever you were taught about gay people – it is wrong. Point blank, period. End of story.”

He acknowledged that he thought his “Southern, conservative” parents grew a lot since he came out, but he said it was painful to see them react badly to his brother coming out.

“Eight years ago I came out to you and it’s been a journey for our whole family. You’ve been amazing all things considered and I thought we’ve made a lot of progress. You even invited my boyfriend at one time on vacation. Yet my brother comes out and it’s like we hit the reset button. It’s like you forgot everything you learned about love and compassion.”

“Be better and do better,” he wrote. “Expand your mind. And if you don’t, fine, I can’t force you to and I certainly won’t bring this up again. But the train has left the station, Dad. My life is on the path it was always meant to be. Get on board or don’t. I will find happiness one way or another. It breaks my heart I have to even ask this of you.”

So I love my parents and I won’t tolerate mean comments… but understand we are from a really southern, conservative background and me coming out was tough. My brother coming out last week was tougher. It took me that long to process but my dad needed to hear this. pic.twitter.com/AFn5rtsWdj

Chandler said that he didn’t think that the tweet would get as much attention as it did – it was liked almost 30,000 times on Twitter – and he said that he would not be posting his father’s response.

“Sharing more of our conversation feels a step too invasive, but he was kind and loving, and I really appreciate that,” he wrote in a later tweet.

A lot of you are asking if I received a response. I did. Sharing more of our conversation feels a step too invasive, but he was kind and loving, and I really appreciate that. Our family is very close and I know I’m privileged in that regard.