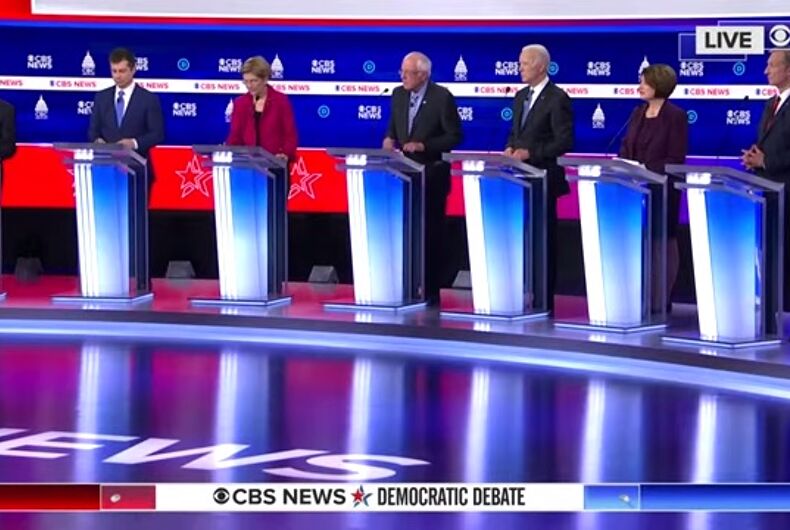 Last night’s Democratic presidential debate in South Carolina was about as organized as a drunken brawl. Candidates spoke over each other, and comments were punctuated with lots of handwaving. Still, it was the last debate before the South Carolina primary and (more importantly) Super Tuesday on March 3, when 15 states hold primaries.

But for all its messiness, the debate did have some important takeaways. Here are six of them:

Related: The Democratic debate was really about who can beat Trump

1) Bernie is on the defensive.

At the debate, Bernie Sanders learned what Pete Buttigieg learned a few months ago: being the frontrunner makes you a target. Unfortunately for Sanders, he’s not quite as quick on his feet as Buttigieg.

Sanders was subjected to several attacks on his record of supporting the NRA and opposing gun control legislation. Vice President Joe Biden recalled the mass murder of black churchgoers in Charleston and said that Sanders opposed the waiting period that would have made it impossible for the white supremacist murderer to have gotten a gun. Sanders said that he “cast thousands of votes, including bad votes,” like that one.

The Vermont senator also came under fire for his kind words about Cuba during a 60 Minute interview Sunday. Buttigieg made a point of linking the comments to the drag those remarks could represent on Congressional races.

“We are not going to win these critical, critical House and Senate races if people in those races have to explain why the nominee of the Democratic Party is telling people to look at the bright side of the Castro regime,” Buttigieg said.

Sanders didn’t offer point-by-point rebuttals of the attacks (which included those on the presumed price tag for his Medicare-for-all proposal). There’s no question that Sanders emerged from the debate with some of the glow from his past victories tarnished. He may be the frontrunner, but he doesn’t have a lock on the nomination yet.

The former vice president has never been a great debater (although don’t tell Paul Ryan that). In some of the past debates, Biden came off as a kind of footnote. Not at this debate. He was much more on his game, landing some solid attacks on Sanders and Tom Steyer (another billionaire buying voter support with endless ads).

Biden also scored points with a good response about the coronavirus outbreak and with questions about foreign policy. His time in the White House were custom-made for those issues. Biden also had a line that many Democrats will love to hear: “NRA, I’m coming for you.”

The debate was by far his best performance to date and just in the nick of time. Biden is counting on South Carolina for a comeback. A strong performance there could re-establish him as the candidate best suited to go head-to-head with Sanders.

3) Pete does well in debates, but is it enough?

Buttigieg always manages to pull out the best lines during the debates. His remarks about race were among the best in the debate.

“I come to this with some humility because I’m conscious of the fact that there are seven white people on this stage,” he said. “None of us — none of us have the experience, the lived experience of — for example, walking down the street, or in a mall, and feeling eyes on us, regarding us as dangerous, without knowing the first thing about us just because of the color of our skin.”

The words have yet to translate into actual support from black voters, though. Buttigieg is about to enter a series of states where the diversity of the electorate may well count against him, and he has little time left to change minds.

In an effort to humanize himself, the former New York City mayor tried out a couple of jokes, including one self-deprecating comment about how well he did in last week’s debate. (Reminder: He was terrible.) Good thing Bloomberg has his billions to fall back on because his jokes bombed.

The bigger issue isn’t that Bloomberg can’t land a punchline. It’s that he can’t fight against Elizabeth Warren’s rhetorical punches. Warren once again pummeled Bloomberg for his lack of commitment to the party he wants to lead. She noted that he funded her competitor, Scott Brown, and Trump suck-up Sen. Lindsey Graham.

That won’t sit well with Democrats looking for, well, a Democrat. Nor did Bloomberg help himself by a slip of the tongue in which seemed ready to say he bought members of Congress. Bloomberg’s days as the great hope of the anti-Bernie brigade may be numbered.

5) Tom Steyer and Amy Klobuchar have to go.

Billionaire Steyer has nothing to offer besides his ego and a fat checkbook. If political talent was the criterion, he’d never be on the debate stage. Anywhere.

For Klobuchar, the issue is viability. She simply has no path to the nomination and little money to sustain her campaign. It’s hard to toss in the towel with that much ego involved (and especially hard for her with Buttigieg still in the running), but it’s clear her time is up.

If incompetence was their goal, Gayle King, Norah O’Donnell, Margaret Brennan, Major Garrett, and Bill Whitaker exceeded it handily. They had no control over the debate, and their questions were often ill-formed to boot. Their performance should earn them a lifetime ban from moderating future debates.