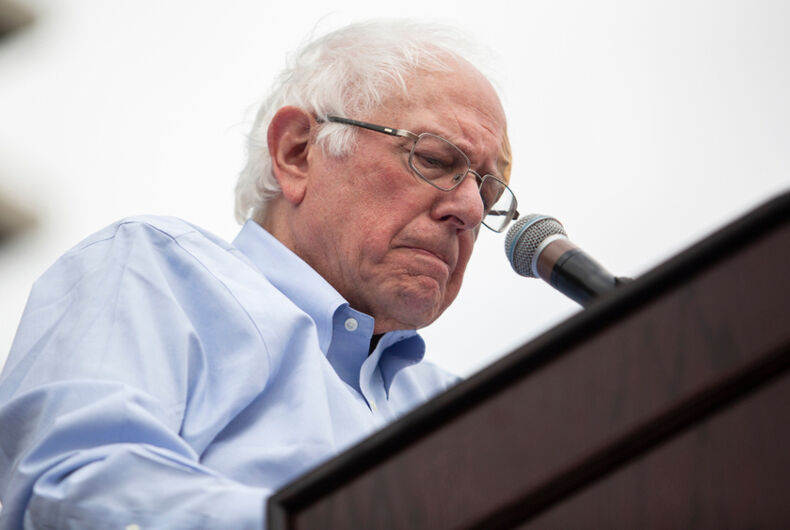 Hard on the heels of a decisive victory in Nevada, Sen. Bernie Sanders decided that the perfect thing to do was defend Fidel Castro.

In an interview that aired Sunday on “60 Minutes,” Sanders revisited his past praise for the Cuban regime. While opposing “the authoritarian nature” of Castro’s Cuba, he added, “it’s simply unfair to say everything is bad.”

”When Fidel Castro came to office, you know what he did?” Sanders asked interviewer Anderson Cooper. “He had a massive literacy program. Is that a bad thing? Even though Fidel Castro did it?”

Sanders’ comments immediately crystallized why the Democratic establishment is wary of his front runner status. When it comes to leftist dictatorships, Sanders has either a blind spot (to be charitable) or a scary affection. In either case, he tends to downplay some of the worst offenses of the regimes.

In addition to saying kind things about Castro, Sanders also was a fan of the Sandinistas in Nicaragua in the 1980s.

While doing all of those things, the Sandinistas, who were backed by the Soviet Union and Cuba, also engaged in human rights abuses, mass round-ups and press suppression. (To be clear, the right-wing regime they overthrew was also brutal.) Sanders was much more circumspect about those abuses, saying that no government is perfect.

Sanders also praised the Soviet Union in 1988 for the openness of its officials during his visit there.

In defense of his “60 Minute” remarks, a spokesman told Vox that Sanders “clearly and consistently criticized Fidel Castro’s authoritarianism and condemned his human rights abuses.”

But Sanders doesn’t cut other governments a similar break. He’s been withering in his criticism of Saudi Arabia, for example, despite its efforts to advance women’s rights.

Cuba represents a particularly hard case for kind words. Castro’s literacy campaign was a success. However, people were being taught to read with political propaganda that carried such titles as “Fidel is our leader.” It was as much an indoctrination campaign as a literacy campaign.

Then too there’s Cuba’s dreadful history of LGBTQ oppression. Gay men were forced into labor camps after Castro came to power in 1959 and were quarantined during the AIDS epidemic. Around the time Cuba was forcibly quarantining gay men in camps, Sanders was praising the country for its revolutionary spirit “far deeper and more profound than I understood it to be.”

In Sanders’ defense, he has a sterling voting record on LGBTQ rights and AIDS funding. But his inability to see the dark side of countries like Cuba is worrisome.

As an old lefty, Sanders seems trapped in some 1960s time warp where the Revolution is coming and the Establishment is going to get theirs. As his “60 Minutes” interview shows, he doesn’t seem to realize that time has moved on.

More to the point, as a politician, Sanders should realize that praising Castro is no way to introduce yourself as a socialist. (It’s also a great way to guarantee you’ll never carry Florida.) Why not talk about Denmark or even Germany?

Instead, Sanders is confirming the Democratic establishment’s fears about his candidacy. Whether that will bother voters enough remains to be seen.

Now evangelicals are mad at Clifford the Big Red Dog