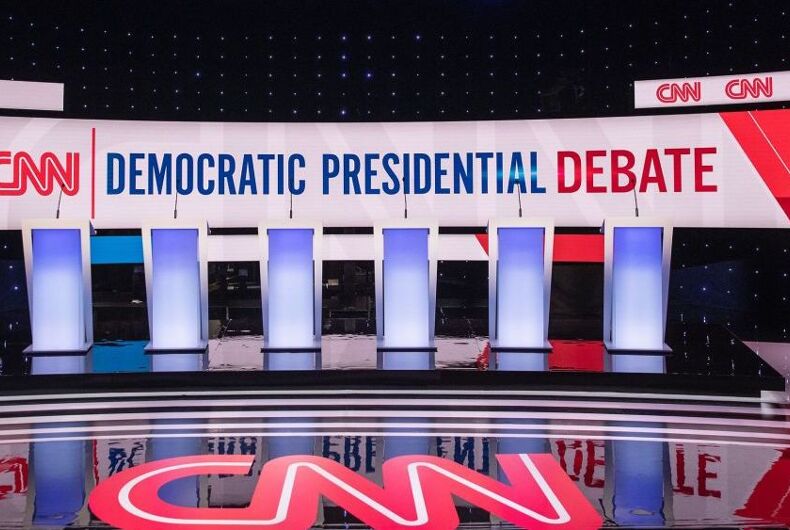 The stage for the January 14, 2020 Democratic debatePhoto: CNN

The final debate before Democrats actually start voting for a presidential nominee was pretty much a rerun of every past debate, just with fewer characters. Only six candidates–only five of them really, plus billionaire Tom Steyer–were on the stage in Iowa.

The debate highlighted what is becoming the main concern of Democrats: who is best positioned to beat Donald Trump?

Some of the back and forth on the stage was about the controversy du jour. Did Bernie Sanders tell Elizabeth Warren that a woman couldn’t be elected? Sanders denied it, and after politely disagreeing, Warren used the opportunity to note that the only candidates on the stage who had never lost an election were the two women.

While that exchange was about women, it underscored the main fear of Democrats everywhere. Are any of the candidates the right ones to defeat Trump?

Each of the candidates did her and his best to make that pitch during the debate. Sanders talked about the energy that his campaign has unleashed. Joe Biden talked about his experience and broad base of support. Amy Klobuchar talked about her track record of performing well in Minnesota, even in deep red districts.

For Pete Buttigieg, the pitch was about being the fresh start the country needed. Asked about his credentials to become commander-in-chief, he noted that he served in the military and then took a dig at the age of his rivals.

“There are enlisted people that I served with, barely old enough to remember those votes on the authorization after 9/11 on the war in Iraq,” Buttigieg said.

Buttigieg always performs well in debates (although it was Warren who called out the epidemic of violence against trans women of color.) The closest he came to the moment that he’s had in past debates is when he said Trump would have to explain his bone spurs excuse to get out of the Vietnam War draft when Buttigieg, a veteran, was the nominee. Buttigieg is always sharp, talks in quotable bites and does a good job of positioning himself as Mr. Common Sense.

Buttigieg responded credibly to Warren’s charge that his health care plan was only a “small improvement.

“We have to move past Washington mentality that suggests that the bigness of plans only consist of how many trillions of dollars they put through the Treasury,” he responded.

The question that Buttigieg is facing is whether what got him this far is enough to get him all the way. There are some signs that Buttigieg may have peaked too soon. His showing in the recent Monmouth poll of Iowa voters, while still strong, was a bit off from his past results.

More troubling, according to the Washington Post, some Democratic county chairs in Iowa are beginning to wonder if Buttigieg is the most electable Democrat, given his age and limited government experience.

“The second-guessing is starting,” one unidentified party leader said. “I think a big part of it is foreign policy, which is now becoming a huge issue in this election, which none of us expected. And that does play to Joe Biden’s strength, and in many ways, they are in the same lane.”

One question late in the debate got right to one of the concerns about Buttigieg’s campaign: why hasn’t he done better with black voters?

“The black voters who know me best support me,” Buttigieg responded. (He just picked up a major endorsement, from Rep. Anthony Brown, a member of the Black Congressional Caucus.)

But without significant black support, Buttigieg will be at a disadvantage not only in the primaries but in the general election as well. By contrast, Biden’s support among black voters is a point in favor of his electability argument, one that he was not afraid to make in the debate. More to the point, none of the other candidates made a dent in Biden’s argument.

Whether the debate will help any of the candidates is an open question. Democrats are focused on who can beat Trump, but they are still uncertain as to who that might be. That’s why there are four frontrunners, including Buttigieg. In less than three weeks, we’ll see if Iowa voters have made up their minds about a single candidate. If not, we’re in for a long, grueling primary season.