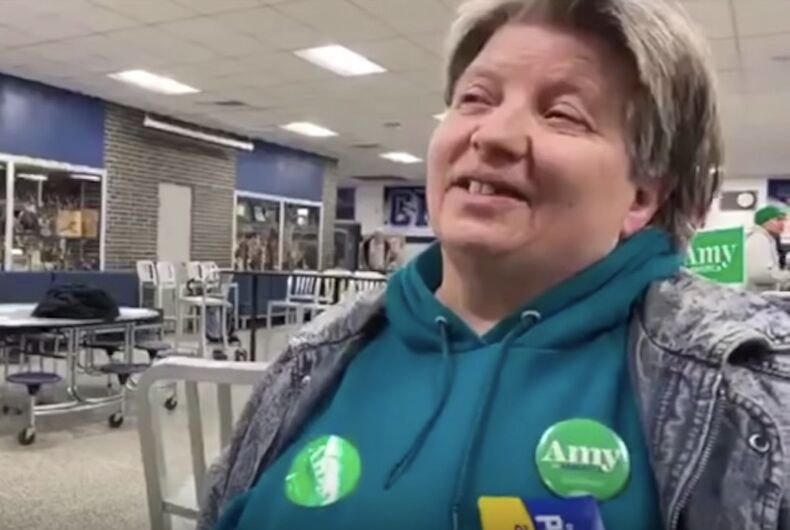 Amid the chaos of last night’s Iowa caucuses, someone captured video of a homophobic Pete Buttigieg supporter who had no idea that her candidate was gay.

“Are you saying he has a same-sex partner?” she asked. “Yes, yes he does,” a worker responded.

“Are you kidding?!” the caucus-goer said. “Yes, he’s married to him, yes,” the worker replied.

“Well,” the homophobe said, “then I don’t want anybody like that in the White House. So can I have my [ballot] back?”

The voter was dumbfounded, but the election worker tried to appeal to her humanity: “The whole point of it is though that he’s a human being, right? Just like you and me, and it shouldn’t really matter.”

“Well, he better read the Bible,” the woman responded, apparently not knowing that Buttigieg has made his Christian faith a central part of his campaign as well.

“He does and he says God doesn’t choose a political party,” the worker said.

The woman brought up the Bible and the worker assured her that she respected her point of view, and then the woman asked, “How come this has never been brought out before?”

“It’s common knowledge,” was all the worker could say.

The woman apparently didn’t realize that Buttigieg publicly kissed his husband Chasten on-stage when first announcing his candidacy in April 2019. He also discussed his personal coming out story in a televised presidential debate.

Much media coverage of him has mentioned that he’s gay, sometimes to say that he’s not the right kind of gay or that he’s too gay to be president.

Even after all that, at least one Democrat in Iowa didn’t get the memo.

Update: The worker in this video has been identified by the Hill as Cresco, Iowa, Buttigieg precinct captain Nikki Heever.

Howard County Democratic Party Chairwoman Laura Hubka tweeted that Heever is a “wonderful example of Cresco.” She also implied that she knew the homophobe in the video and referred to her as “Geert.”

@PeteButtigieg this is it. This is what it's all about. I have known Geert for many years. I had no idea that she was a homophobe. @NikkiHeever is a wonderful example of Cresco Iowa. I thank her with my whole heart. @Sara_Goldstein @BrendanMcP https://t.co/s1ueExjmaf

The first openly gay federal judge passed away at 72