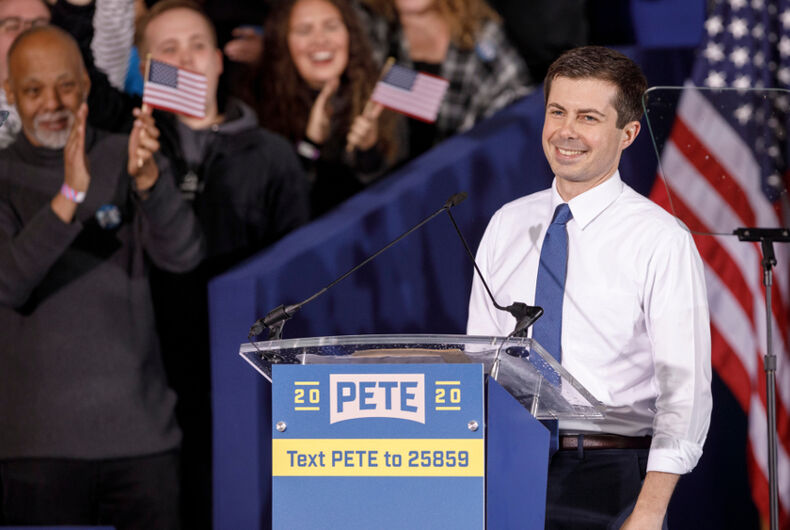 Supporters who watched former South Bend, Indiana Mayor Pete Buttigieg’s speech in Iowa last night could be forgiven for thinking he won the first primary battle of the year.

But the results of the race aren’t even in yet.

Iowa’s caucuses were held yesterday. Caucuses are an arcane and archaic system of voting for a primary candidate that involves people meeting in churches, schools, and other community buildings and trying to convince other voters to support their candidate for 30 minutes. At that point, the supporters for each candidate are counted, those with less than 15% support get dropped, and another 30-minute convincing period starts to allow voters to realign.

Each precinct’s results were supposed to be reported on an app, according to the Guardian, but a lot of people had trouble with the app so they called a phone line set up for help. The phone line was overwhelmed, and official results still can’t be reported.

But that didn’t stop Mayor Pete from delivering what sounded like his victory speech.

“So, we don’t know all the results,” Buttigieg said late last night at a rally in Des Moines. “But, we know, by the time it is all said and done, Iowa, you have shocked the nation. Because, by all indications, we are going on to New Hampshire victorious.”

But even this morning, the results aren’t in from the Iowa caucuses.

Joe Rospars, a strategist with the Warren campaign, took a shot at Buttigieg on Twitter: “Any campaign saying they won or putting out incomplete numbers is contributing to the chaos and misinformation.”

Sen. Bernie Sanders (I-VT) delivered what NBC News reports was a modified version of his victory speech, saying that he has a “good feeling” about the results.

“I have a strong feeling that at some point the results will be announced,” Sanders said at his campaign headquarters in Des Moines. “And when those results are announced, I have a good feeling we’re going to be doing very, very well here in Iowa.”

Sen. Elizabeth Warren (D-MA) said in her speech that the results were “too close to call,” and instead focused on attacking Donald Trump.

“We are one step closer to defeating the most corrupt president in American history,” she said.

Former Vice President Joe Biden stayed away from making any sort of victory claim: “We are going to walk out of here with our share of delegates. We don’t know exactly what it is yet, but we feel good about where we are.”

Part of the delay comes from Democratic Party volunteers refusing to use the app.

“I have 75-year-old caucus chairs who are sitting here going, ‘I’m just going to call that in,’” Sarah Truitt, co-chair of the Clarke County Democrats, told the New York Times. “This was too many new things to learn for a lot of people. Not everybody that goes to the caucus is a 20-year-old college kid.”