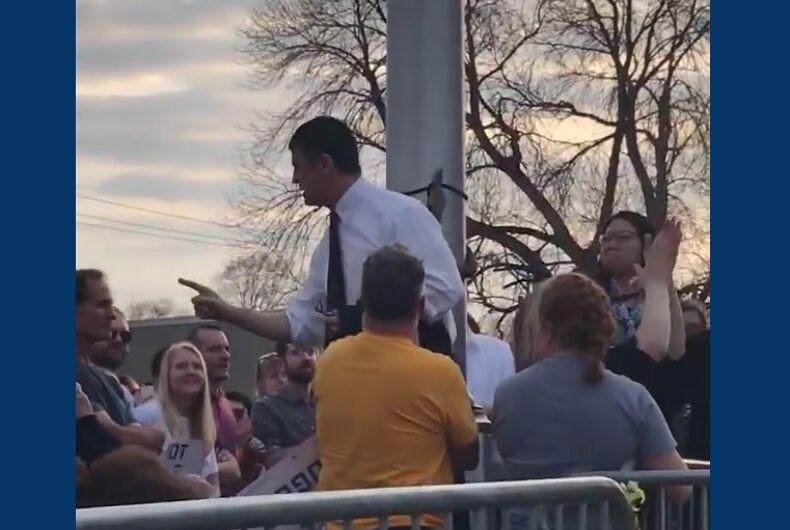 At a campaign stop in Des Moines, a person outside called Buttigieg “baby killer” and shouted repeatedly “Remember Sodom and Gomorrah” after Buttigieg brought up his husband, Chasten.

Buttigieg acknowledged the heckler, telling supporters, “The good news is the condition of my soul is in the hands of God. But the Iowa caucuses are up to you” as the crowd erupted in laughter.

A different heckler at another stop also got laughed off by the candidate and the crowd.

Another protester interrupting ⁦@PeteButtigieg⁩ with chants of “remember Sodom and Gomorrah” pic.twitter.com/l0FvgYBFWQ

Another heckler in Des Moines was also drowned out by chants of “Pete” from the crowd.

VIDEO: man at @PeteButtigieg Iowa rally shouted down by crowd and hauled off after he disrupts mayor’s remarks shouting “remember Sodom and Gomorrah.” pic.twitter.com/nhIttnRncM

At a separate campaign stop in Fort Dodge, a man started shouting that Buttigieg was betraying his baptism.

“We will not stop, he is misleading our children,” the man shouted before being escorted away.

Here’s video of that protester at Buttigieg’s Fort Dodge town hall, and his response: pic.twitter.com/gf66B67405

“Coffee after church gets a little rowdy sometimes,” Buttigieg joked.

The protests were organized by Randall Terry of the extreme anti-choice group Operation Rescue.

In 2016, Terry drove a bus that said “It’s a sin to vote for Hillary.” Now he’s in Iowa and this week he has been following Buttigieg’s campaign stops.

“There are literally children who are going to be seduced into the homosexual lifestyle because this man is heralded as a hero,” Terry told the Hawk Eye. “He’s a champion, and that makes him more sinister than the average person… he’s an evil-doer.”

“He’s the beautiful face of evil.”