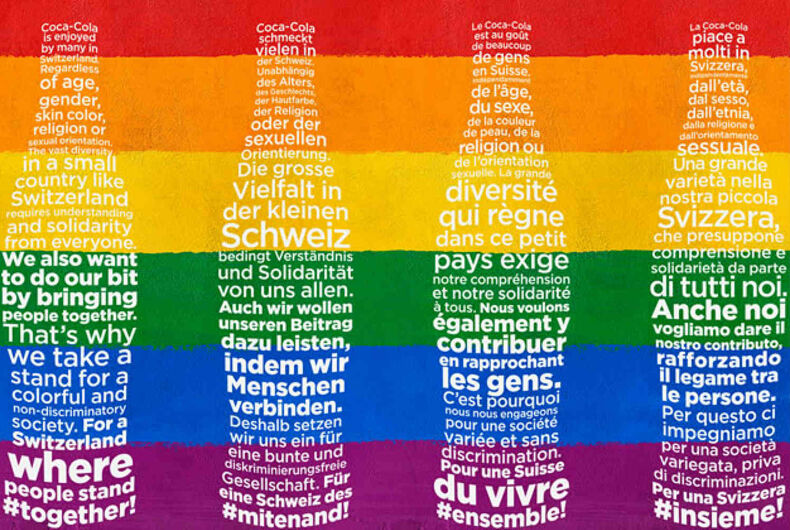 Coca-Cola purchased the covers of newspapers all over Switzerland to deliver a pro-equality message.

On February 9, Switzerland will be voting on an initiative that could add sexual orientation to the list of protected identities in the country’s anti-discrimination law.

Related: A Swiss daycare rejected twin 3-year-olds because they have gay dads

Currently, there are only limited protections against discrimination based on sexual orientation in Switzerland, which also bans marriage for same-sex couples, adoption by same-sex couples, and in-vitro fertilization for lesbian couples.

A majority of the country – 65% in a recent Swiss Info poll – is in favor of adding sexual orientation to the country’s anti-discrimination law, and Coca-Cola is as well.

Last Thursday, the American soda giant bought the covers of several daily papers, including 20 Minutes and Die Weltwoche. Over a rainbow background, the covers had a message in the form of a Coke bottle:

Coca-Cola is enjoyed by many in Switzerland. Regardless of age, gender, skin color, religion, or sexual orientation. The vast diversity in a small country like Switzerland requires understanding and solidarity from everyone. We also want to do our bit by bringing people together. That’s why we take a stand for a colorful and non-discriminatory society. For a Switzerland where people stand #together!

A few people are complaining about the covers, including Benjamin Fischer, President of the Young Swiss People’s Party (JSVP), one of the major opponents of the ballot initiative, who wrote a press release on the ad campaign entitled, “I don’t like Coca Cola anymore!”

“Coca-Cola uses Switzerland’s direct democracy to show itself in a light that the company is not entitled to,” JSVP Managing Director David Trachsel told Blick.

“Coca-Cola is doing business in countries where homosexuality is still banned or even punished with death,” he added.

The law was sent back to the Federal Council, which – despite demands from left-wing parties to keep transgender people in the protections – voted in favor of the bill.

But before the law could go into effect, opponents had already gathered the necessary signatures to force the issue to go on the ballot.

The question of adding sexual orientation to anti-discrimination laws will appear alongside an initiative about public housing.

Pete Buttigieg declares victory in Iowa… before the results are announced