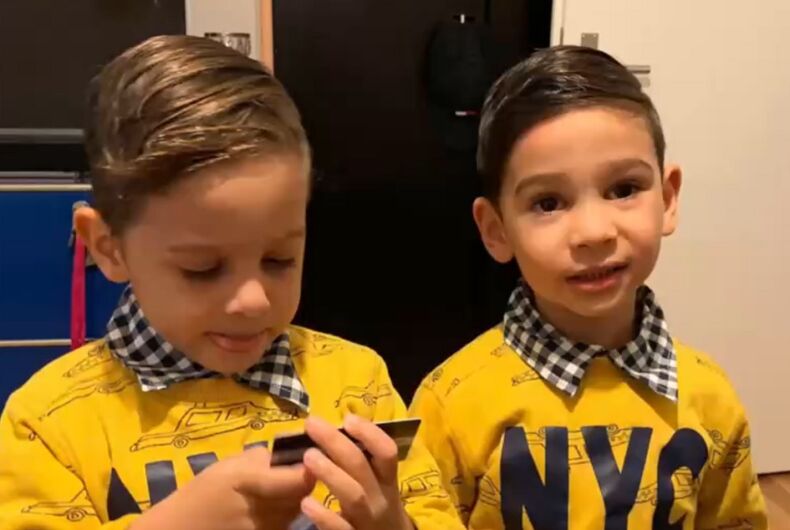 Twin three-year-old boys were rejected by a daycare center because they have two dads.

Stefan and his husband Rosha tried to enroll their sons Rafael and Rahul in a playgroup in Lenzburg, Switzerland, but they were turned away because they are both men and a gay couple raising children is “neither normal nor natural.”

Related: A Catholic school rejected a kindergartner with gay parents. Now other parents are rallying.

A playgroup is a type of daycare that’s usually for only part of the day and focuses on socializing kids before they attend preschool.

The daycare’s director “said that children can be very mean, and that’s why she didn’t want to welcome the kids of a gay couple,” Stefan told the Swiss newspaper 20 Minutes.

Unfortunately, there might be nothing that Stefan and his husband can do about the discrimination. Christoph Hofstetter, Lenzberg’s town clerk, said that the playgroup doesn’t receive any public money and therefore doesn’t have to accept the children.

And the Schweizerischen Spielgruppenleiterinnen-Verband (the Swiss Playgroup Federation) said that playgroups are considered voluntary in Switzerland and that no qualifications are necessary to start a playgroup.

“This incident shows that protection against hate and discrimination is a necessity,” said lawyer and Vice President of Wybernet – a lesbian professional network – Cordula Niklaus. “If these children had Jewish parents, excluding them would be illegal.”

This past Saturday local activists held a kiss-in to protest the discrimination. About 15 people attended.

“It’s good that our case led to a discussion about homophobia in society,” Stefan said. “We hope that no other gay or lesbian couple will have to face the same discrimination that we did.”

Stefan and Rocha said that they are still shocked by what happened and they are considering waiting for preschool to start for the kids next year instead of putting them in a playgroup this year.