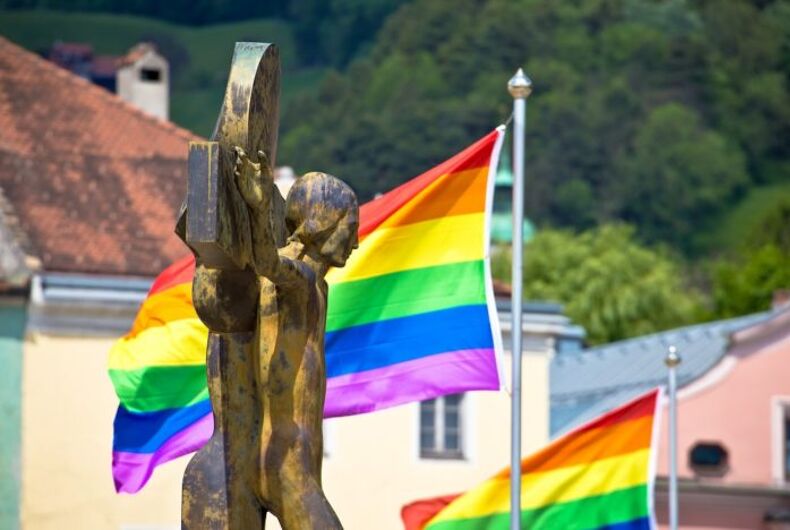 A Catholic school in Kansas has come under fire for refusing to admit a kindergartner because their parents are a same-sex couple.

Last month, Craig Maxim, the pastor of St. Ann Catholic Church and School in Prairie Village, near Kansas City, sent a letter to parents saying that a child had been rejected from the kindergarten program because their parents were of the same sex. The child’s name and gender identity have not been made public.

While some Catholic dioceses in the U.S. allow children of same-sex couples to attend their schools, this one believes that it “creates a conflict” for the child between the homophobia they would learn at school and the LGBTQ-positive environment at home.

Now almost 1000 people signed a petition asking the school to admit the child. About half the people who signed the petition are members of St. Ann.

“One of the many reasons that we choose to send our children to St. Ann is the welcoming culture, which is central to the original ministry of Jesus Christ,” the petition states.

“Respectfully, we believe that the decision to deny a child of God access to such a wonderful community and education, based on the notion that his or her parent’s union is not in according with the Church’s teaching in Sacramental marriage, lacks the compassion and mercy of Christ’s message.”

The letter says that the church hasn’t been very strict when it comes to requiring all students’ parents to follow the church’s teachings on sexuality, citing “vasectomy, IVF, divorce, and remarriage without approved annulment” as examples.

The church responded with a statement that said, “Individuals with same sex attraction should be treated with dignity.”

“However, the challenge regarding same sex couples and our Catholic schools is that same sex parents cannot model behaviors and attitudes regarding marriage and sexual morality consistent with essential components of the Church’s teachings.”

Despite the petition, the school is unlikely to budge.

“The Church’s teaching on marriage is clear and is not altered by the laws of civil society,” said Superintendent Kathy O’Hara in a statement.

Note: An earlier version of this story said that Prairie Village is in Missouri, not Kansas. We regret the error.