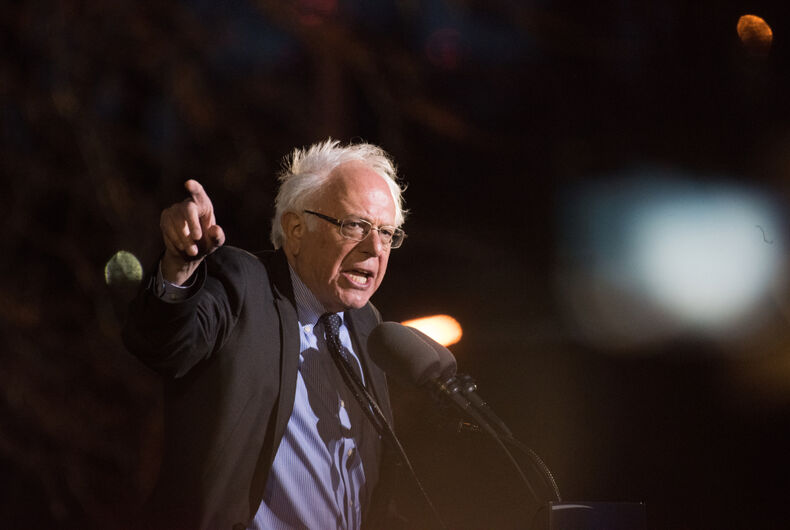 When Rep. Duke Cunningham (R-CA) attacked Democrats on the House floor in 1995, derisively saying the party wanted to put “homos in the military,” then Rep. Bernie Sanders (I-VT) rose to the community’s defense in a sharply worded take-down worth rewatching while we wait for the results of the Iowa caucuses.

While Buttigieg declared an early victory despite a lack of formal results, Sanders’ long-standing support for the LGBTQ community is highlighted by this CSPAN clip. A dozen years before Buttigieg joined the military and two years after Congress passed “Don’t Ask, Don’t Tell,” the law that prohibited out gay men and lesbians from serving, Sanders sharply put the anti-gay Representative in his place.

After a contentious back and forth, Sanders calls “the gentleman from California” back to the podium to ask if he’d heard correctly: did the Republican Congressman refer to “homos in the military”?

Sanders’ campaign has been shaken lately, with endorsements by noted anti-LGBTQ personalities. Earlier in the primary season, Sanders got a lukewarm, unsolicited “endorsement” from someone that has compared homosexuality to pedophilia, spoken out against trans youth, and used hate speech while hosting hate group leaders on his podcast.

Earlier this month, media personality and comedian Joe Rogan said on an episode of the Joe Rogan Experience podcast that he “will probably” vote for Sanders as the party’s nominee and Sanders shared a video of the clip on his Twitter feed and refused to reject the endorsement. Rogan is notorious for his anti-LGBTQ insults and slurs.

A poll by Morning Consult released this month shows that Sanders is the top pick for LGBTQ voters nationwide. Buttigieg was fourth.

Pete Buttigieg declares victory in Iowa… before the results are announced

The first openly gay federal judge passed away at 72