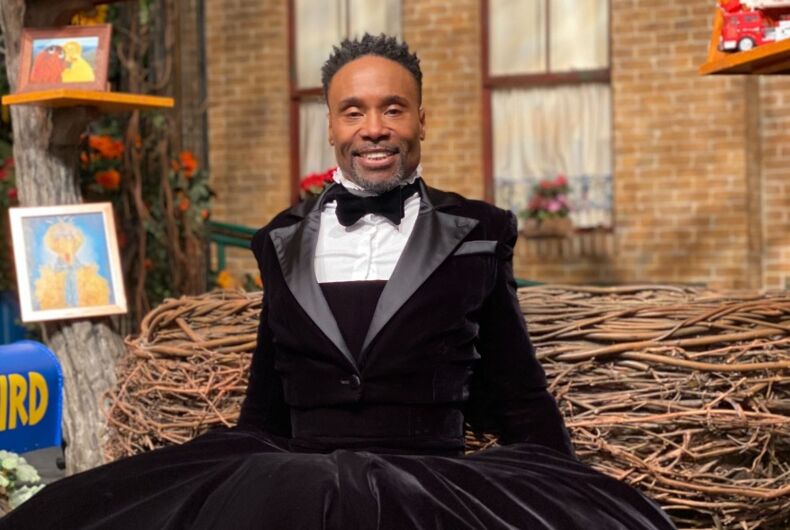 A Republican state senator in Arkansas suggested pulling funding for public television in the state because a gay actor will appear on Sesame Street this year.

Along with the announcement, Sesame Street posted a picture of him in his famous tuxedo-gown in front of 123 Sesame Street.

Arkansas Sen. Jason Rapert (R), who has already announced his 2022 campaign for Arkansas Lt. Governor, posted to Facebook that Porter’s appearance on the show is part of the “radical LGBTQ agenda” and suggested that public funding for the show should be cut, in a post found by the Arkansas Times.

What do you think I should do about this as your state senator? Do you approve of your taxpayer dollars being used to promote the radical LGBTQ agenda?

In the comments on the post, Rapert said that he wants to cut funding from AETN, Arkansas’s PBS affiliate.

He claimed that he has been “a defender and champion for” public broadcasting, but that allowing a gay man in a dress on a children’s TV show is a step too far.

“However, if they [AETN] choose to allow our state taxpayer funded platform to be politicized in this way, they are going to have to make a decision about who they really serve,” he wrote.

In a separate Facebook post, Rapert claimed to have signed a petition to stop Porter from appearing on Sesame Street, a petition started by Canadian rightwing website Lifesite News that claims to have over 38,000 signatures.

I signed. Take a stand.

A commenter asked Rapert if Jesus would “approve of your judgment and intolerance?”

Rapert responded: “You are totally amiss and you know it. Christians do not support anti-Biblical behavior. The Bible is clear on certain sins — including homosexuality.”

He said that Jesus “never endorsed homosexual behavior” and then brought up “Sodom and Gomorrah.”

“Speaking the truth is not hatred,” Rapert concluded. “If you oppose the Bible, you are not a sincere Christian.”

This isn’t the first time a Republican suggested cutting funding for public broadcasting because of LGBTQ themes. Last year, Rep. Doug Lamborn (R-CO) called on Congress to de-fund the network when a male character on the children’s cartoon Arthur married a man.

Hey, Americans! Stop being so afraid of the rest of the world!