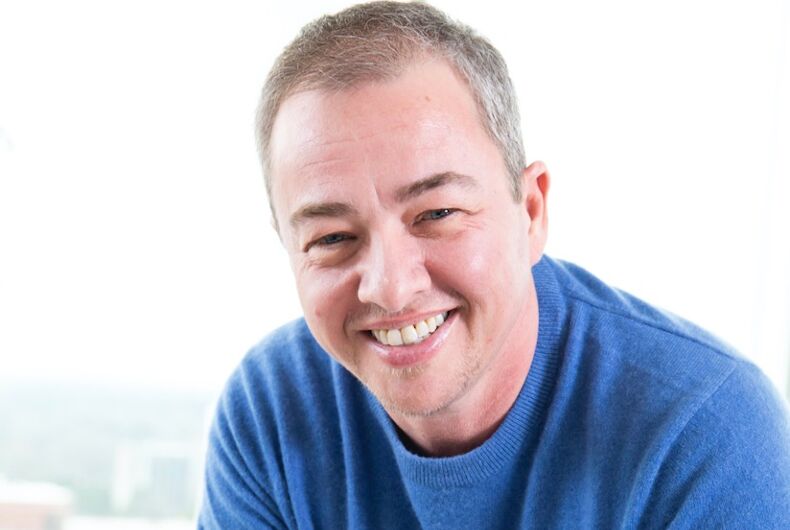 As possibly the first transgender man to run for political office in North Carolina, Gray Ellis knows that in his race for state senate, his identity means something.

“I understand what it’s like to feel like an outsider,” said Ellis in his campaign video, “to question whether I’ll be accepted for simply being who I am. I’m a trans man… I’m one of the voices not heard in North Carolina politics. It’s imperative to have a voice of reason and knowledge representing you, a voice who understands how it feels to be marginalized.”

For Ellis, who is running in North Carolina’s 20th district, being out and open is crucial.

“If we don’t come out and let people know,” he told LGBTQ Nation, “then people’s hearts and minds are not likely to change.”

Ellis says many people believe they have never met a trans person, even though it is more than likely they have.

“When you have someone with my professional and life experience who happens to be trans guy, too,” he said, “people are better able to identify… and not be as judgmental and close minded as they may be without that exposure, or known exposure.”

The state is known for passing the highly controversial House Bill 2, otherwise known as the Public Facilities Privacy & Security Act, in 2016. HB2 required individuals to use the public restroom that corresponded with the sex they were assigned at birth, and it also invalidated  existing anti-discrimination measures passed by counties and cities.

The bill was repealed in a compromise in 2017, after the NCAA said they would no longer host events in North Carolina, but LGBTQ rights groups were enraged by the deal that was made to make the repeal happen.

The bill put in its place, HB142, prevented cities and counties from passing their own anti-discrimination ordinances to regulate private employers for at least three years.

On December 1st, 2020, that three-year period will come to an end, and Ellis thinks it’s important for someone like him to be in the state Senate when that happens.

“You might want someone who knows what the hell they’re talking about sitting at the table when that comes up,” he said.

Passing anti-discrimination laws throughout the entire state is a priority for Ellis — and he believes more of North Carolina is on his side than the state’s lawmakers make it seem.

“I do think the majority of North Carolinians are not these hate-filled, homophobic, transphobic people the legislature pretends they are,” he said. “This is more a game between the Republicans and the Democrats. This is not consistent with North Carolina values.”

Another priority for Ellis is increasing access to mental healthcare. The National Association of Mental Illness gave North Carolina an “F” grade for its treatment of mental health in comparison to physical health, which Ellis believes is an outrage.

“We do nothing to ensure insurance companies comply with the law of parity,” he said. “Literally nothing.”

A North Carolina native, Ellis has been a family law practitioner in Durham for the past eighteen years and is the founder and managing partner of Ellis Family Law.

He has won the Better Business Bureau’s Torch Award for Marketplace Ethics in North Carolina and is also on the board of Meals on Wheels in Durham, for which he created the annual Feed the Need Gala, the highest fundraising event in the program’s 45-year history.

Ellis believes his experience as a lawyer has prepared him well for the demands of being a state senator.

“As a family law specialist there are three things we primarily focus on: negotiation, advocacy and working on the law,” he said. “What does a senator do? They negotiate, they advocate, and they work on the law.”

Ellis, who has been endorsed by the LGBTQ Victory Fund, said he is accustomed to working with people who have completely different views of the same situation.

“We’re so polarized even in our own party that if you disagree with me on one thing, even if we agree on 80%, suddenly we’re adverse to each other,” he said. “We’ve got to come back together… We need someone who can build a bridge and has skills to negotiate and advocate and bring people back to a common ground.”

Ellis is running in the progressive Durham County, where he said the fact that he is transgender doesn’t faze most people.

His district encompasses the Southern part of the county, which he says is a majority minority area that struggles with affordable housing, the rising cost of living, and a lack of funding for education.

“Some things have to be handled on the local level” he said. “But there are some things we can do on the state level to help.”

In the upcoming primary election on March 3, Ellis will face off against professor and social entrepreneur, Pierce Freelon, and Soil and Water Conservation District Supervisor, Natalie Murdock.

Ellis believes his age and experience makes him superior to his younger opponents.

“They don’t have a lot of life experience and certainly don’t have professional experience to back them up,” he said. Both Murdock and Freelon are in their mid-late 30s.

“I’m 47-years-old, I can identify with many people. I have 25 years of advocacy work. I have 15, 17, 18, and 23-year-old kids, I get the younger generation, my grandparents are still around. I can better identify with the entire population.”

“Most of the people in the legislature are 50, 60, 70 years old. When you’re thirty, you’re not going to be taken seriously.”

Ellis wants voters to know that he believes he can be a voice at the table for them. “I have the life experience, and I have the professional experience to actually be able to lead and make a difference in Raleigh,” he said.

Others who may make history alongside him are Angela Bridgeman, a trans woman running for state senate in North Carolina’s 18th district, and Sarah McBride, who is running for Delaware state senate.

The revolutionaries behind the Black LGBTQ hip-hop movement