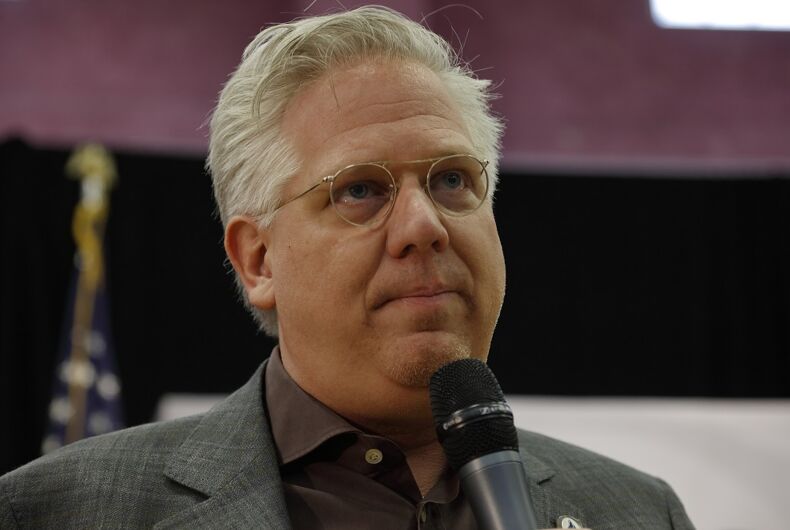 Glenn Beck is the latest conservative media figure to say that Pete Buttigieg can’t be Christian and gay.

During the debate, Buttigieg said that he doesn’t want to “tell other Christians how to be Christians,” but that he “can’t find any compatibility between the way this president conducts himself and anything I find in Scripture.”

“A lot of people would find your lifestyle antithetical to what is found in the Bible,” Beck said on his show yesterday. “I mean, you just – Pete, you can’t make this claim.”

He stipulated that that’s “not an endorsement” of stoning LGBTQ people. He did not explain how.

Since there are only a few Bible passages that speak about LGBTQ people specifically and their meanings are debatable, LGBTQ Christians generally focus on the parts of the Bible that discuss justice and compassion for human beings in general, since LGBTQ people are human beings.

But Beck said that Buttigieg should instead say: “Look, I, mean, you know, I try to live my life based on, you know, basic principles, many of them were found in the Bible, and I don’t know how to square [my] behavior.”

It is unlikely that Buttigieg would, though, since his sexual identity is not “behavior” or a “lifestyle.”

“You can’t pick and choose if you’re going to use the Bible,” Beck concluded.

As Buttigieg has gotten more attention in the media as a gay Christian, Christian conservatives have ramped up attacks on his sexuality. His brother-in-law, pastor Rhyan Glezman, said on Tucker Carlson’s show this week that Buttigieg’s campaign is “anti-God,” and Carlson blasted Buttigieg for “lecturing Christians,” as if Buttigieg isn’t legitimately Christian himself.

Beck has his own history of anti-LGBTQ comments. In 2014, he said that gay people are “are becoming nothing but a terrorist organization.”

That same year, he said, “Hillary Clinton will be having sex with a woman on the White House desk if it becomes popular,” implying that she will choose to be gay in order to win more votes in the then-upcoming presidential election.

Man attacked a gay couple in front of their parents

Gray Ellis wants to be the first trans man to be a state senator in the U.S.