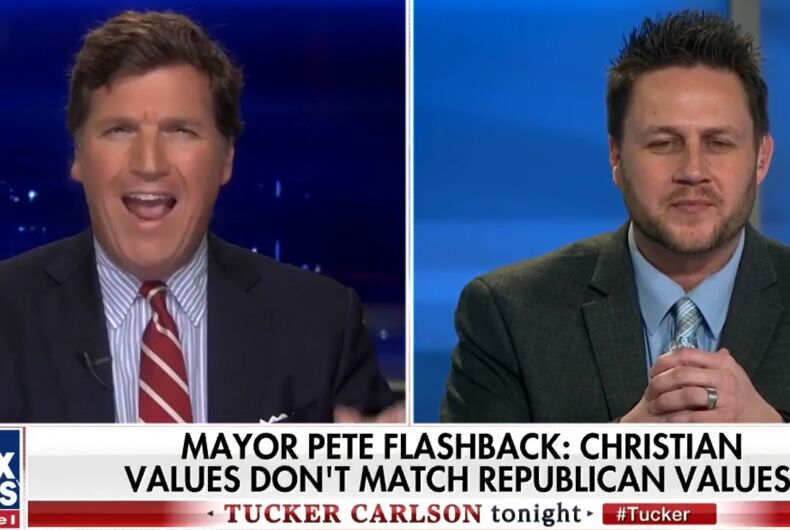 At Wednesday night’s Democratic debate, Buttigieg was asked what he thought about Christian support for Trump.

Buttigieg said that he won’t “tell other Christians how to be Christians,” but that he “can’t find any compatibility between the way this president conducts himself and anything I find in Scripture.”

This set Glezman off on Tucker Carlson Tonight.

“In the height of intellectual dishonesty for Pete to make claims that there’s no compatibility with being a Christian and voting for Trump, when Pete, in fact, is the one who is pushing agendas and rhetoric that is against, clearly against Scripture,” Glezman said.

He then accused Buttigieg of wanting to legalize infanticide: Buttigieg “can’t make a moral decision on whether to keep a child after it’s already been born or have it killed.”

But Carlson asked Glezman if real Christians believe people should be “allowed to kill a child.”

“I encourage Pete, and everyone in America, to read Psalm 139:13-16, where God says in His word that every single person is ‘fearfully and wonderfully made’ in the image of God,” saying that Buttigieg was using “anti-God rhetoric.”

Carlson also said that it “wasn’t allowed” for a Christian to “wag his finger in the face of people” to make a moral point, even though Buttigieg made it clear that he was only speaking about his personal faith.

“Just everything that Pete is pushing is, it’s anti-God. I’m just gonna be honest with you,” Glezman responded. “Nothing lines up with Scripture for him to make cases like to say that you cannot be a Christian and vote for Trump. He’s the one that is openly contradicting God’s word over and over.”

This isn’t the first time that Glezman has gotten a prominent spot on rightwing media because he’s the brother-in-law of a well-known Democrat.

Last year he appeared on the Ingraham Angle on Fox News and he talked about how he told his brother Chasten that he doesn’t “support the gay lifestyle” when he came out. Chasten said that his family rejected him and he was homeless for about a year.

He said that it was actually Chasten who rejected him and that Pete made up the entire story of Chasten being rejected “to gain political points in the polls.”