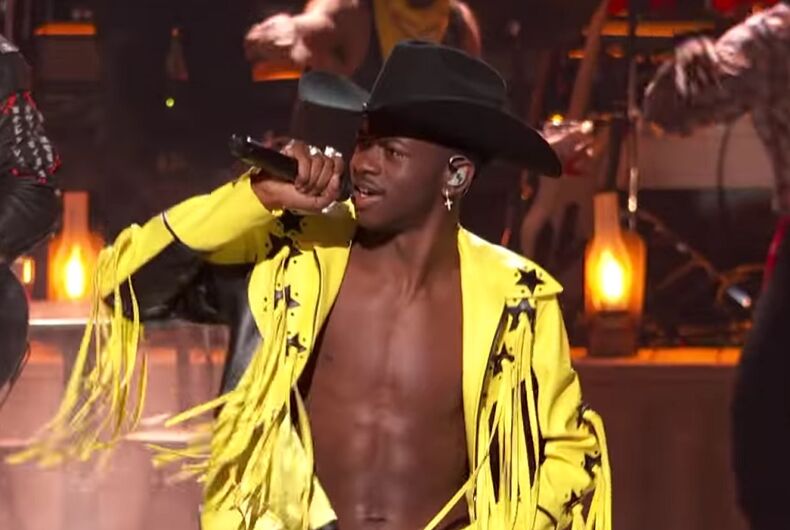 I discovered queer rap at some point in between early and late puberty when I found a gym-bodied white gay man named Cazwell, dancing in his underwear on LOGO. Cazwell’s lyricism was as packed full of popsicle and cake innuendos as his videos were half-naked Latino background dancers.

After Cazwell, I journeyed deeper into the world of queer hip-hop to discover what else the genre could provide. I came across acts like Le1f, Cakes da Killa, Junglepusy, and Mykki Blanco, and realized that it was no coincidence that Cazwell was the first I’d seen on TV. As a white guy he found a platform within the mainstream LGBTQ+ community through a genre pioneered by Black artists.

For a long time, it seemed like Black gay hip-hop was doomed to the niche, underground environments, that it formed in. That’s why it was a huge moment when Lil Nas X rode to number 1 on the Billboard Hot 100 and made history as the longest running artist with the title.

I didn’t believe that a gay Black man could fuse hip-hop with country and take his song to number one. But Lil Nas X has all the necessary components of an American music icon — he’s distinctly individual, versatile, and mixes niches so seamlessly as to defy the concept of “niche” itself.

He also does what LGBTQ+ hip-hop artists have done for decades, which is to tell the hip-hop genre that you will take me — all of me — because this is my home too, regardless of who I love or how I identify.

Hip-hop as the unapologetic expression of Black experiences and will always exist above the biases that individual artists have historically brought to it.

Back in 2004, when Deep Dickollective released The Famous Outlaw League of Proto-Negroes, it became one of Out magazine’s Top Ten Gay Albums, it was still normal to hear a gay slur in a mainstream rap song. Black queer people were just getting room to breathe in music because artist-scholars like Juba Kalamka, Tim’m T. West, and Phillip Atiba Goff were fighting for it. They brought not only beats, basslines, and bars, but social defiance and queer theory to their lyricism.

The raw power that comes out of their song titles alone — “Butchqueen,” “For Colored Boys,” and “Ghetto Rainbows” — would prove they’re interested in affirming themselves, in the same way all other hip-hop artists do.

It’s always easier in a collective to execute that kind of power. Many of the queer hip-hop artists of today are or have been associated with groups known for their mutual love, adoration, and “weirdness.”

Odd Future birthed Tyler the Creator, Frank Ocean, and Syd. Kevin Abstract’s delivered a passionate love story from the heart of a suburban gay Black boy in American Boyfriend, and unleashed a more raw, sexual side of himself after forming Brockhampton — a team of like-minded individuals who’ve risen to critical acclaim in mainstream magazines as the Fader and Rolling Stone.

Queer rappers who skate around traditional categories of sexuality and gender are often found as associated acts on the concert circuit and in their own music. Their individualities, when combined, inspire something that takes us beyond what any one of them represents on their own.

It’s a legacy of change that subverts old notions of hip-hop as much as affirms what hip-hop is, at its very core: an outlet for disenfranchised Black youth to express our realities through art.

Black queer hip-hop artists, in every way that they present, deserve network opportunities, seats at the Grammys, and Billboard awards. They deserve parlors, plaques, deals with Universal Music Group and Atlantic. They deserve attention and accolades for their not only their artistry, but the ways in which they complicate the notion of power and what it means to claim it.

Gray Ellis wants to be the first trans man to be a state senator in the U.S.