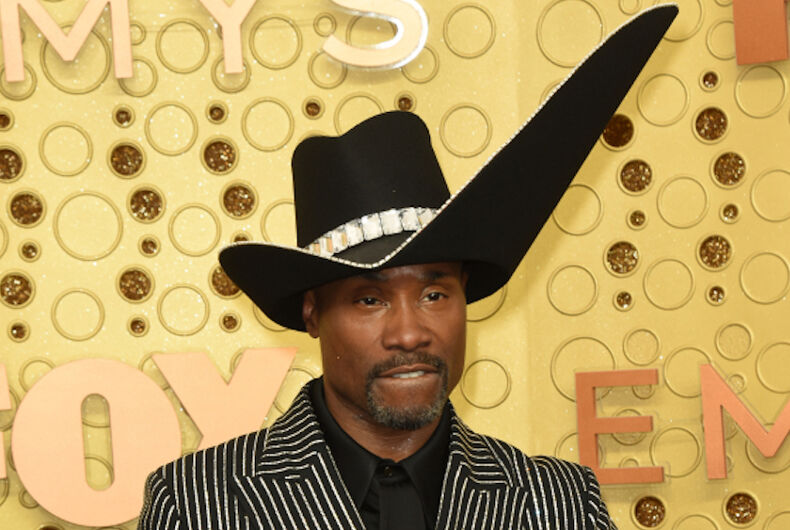 At the New Yorker Festival this week, gay actor Billy Porter said that homophobia and racism stopped his music and acting careers from taking off in the 80s and 90s.

Related: Billy Porter will play the fairy godmother in the upcoming ‘Cinderella’ movie

“It just was never about the music,” Porter said. “It was about trying to fix myself so other people would feel comfortable around me.”

He released a self-titled album in 1997, but he didn’t release a second until eight years later. He eventually released a third one containing hit songs from Broadway musicals in 2014.

As for acting, Porter says that all casting agents wanted from black male actors in the ’80s and ’90s were “James Earl Jones, the patriarch. Denzel Washington, the sex symbol, or genius clown, Eddie Murphy.”

“Where am I fitting in?” he asked rhetorically. “I became a character actor to hide behind little weight and work so I could eat.” After a long time of not finding work, he ended up filing for bankruptcy, lost his apartment, and went without health insurance for 13 years.

Of course, the actor has since made a name for himself by playing Pray Tell in the FX ballroom drama Pose and rocking genderqueer couture on the red carpet.

James Baldwin said: “It took many years of vomiting up all the filth that I had been taught about myself and halfway believed, before I could walk around this earth like I had the right to be here.” I have the right, you have the right, we all have the right.

The New Yorker Festival touts itself as bringing “together the biggest names in news, politics, books, film, music, art, and popular culture for three days of events – from panels and live performances to intimate discussions and exclusive screenings.”

A British journalist tried to get Hillary & Chelsea Clinton to bad-mouth trans women. Did it work?

An app says it can tell how gay you are by looking at your DNA. Real scientists are not having it.