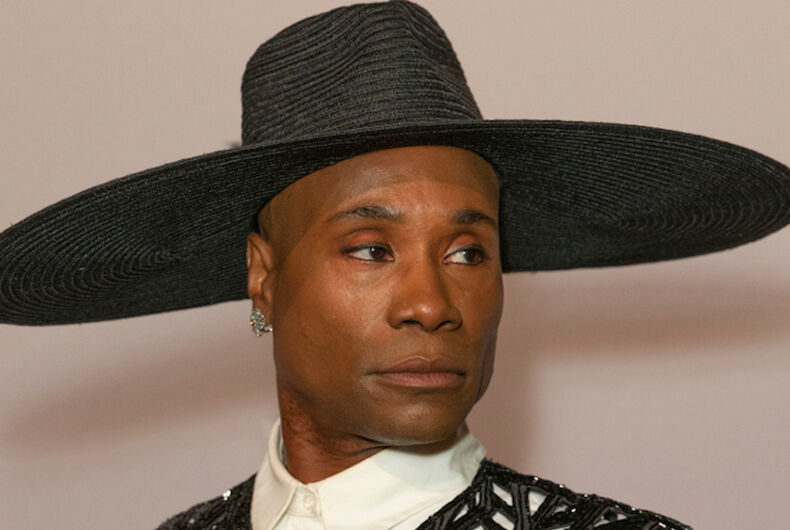 Billy Porter, the gay 50-year-old actor who plays Pray Tell in the FX ballroom drama Pose, has been been cast to play the fairy godmother in Sony’s new live-action Cinderella movie, due out in 2021. The film will be a modern-take on the tale of an orphaned girl who magically finds love with a prince after years of enslavement by her stepmother.

Porter will play the wish-granting pixie alongside Cuban-American singer and actress Camilla Cabello as Cinderella — she’ll also be “integrally involved in the music for the film,” suggesting that the film will be a musical.

This will be Porter’s seventh film role. In 2000, he played the role of Taylor, a flamboyant and jaded friend, in the gay romantic comedy The Broken Hearts Club. The small role involved his dismay after his long-term boyfriend dumps him.

Broadway singer Idina Menzel is in talks to play the evil stepmother, according to Buzzfeed News. Menzel would make an ideal choice to play the villain seeing as she has already played the vilified Wicked Witch of the West in the Broadway musical Wicked.

The film has reportedly not yet cast the role of Prince Charming.

People magazine notes that Porter “recently made history when he became the first openly gay black man to be nominated for and win best actor in a drama at the 2019 Emmy Awards, for his portrayal of Pray Tell in FX’s Pose.” He’ll also direct an upcoming episode of Pose and is penning a memoir.

Although versions of the Cinderella tale date back as far as Greece in 7 BC, the best known re-telling emerged from French writer Charles Perrault in 1697, nearly 115 years before the Grimm Brothers included it in their 1812 collection of German folk tales.

A gay man was beaten, dragged & robbed after refusing to perform oral sex on a stranger