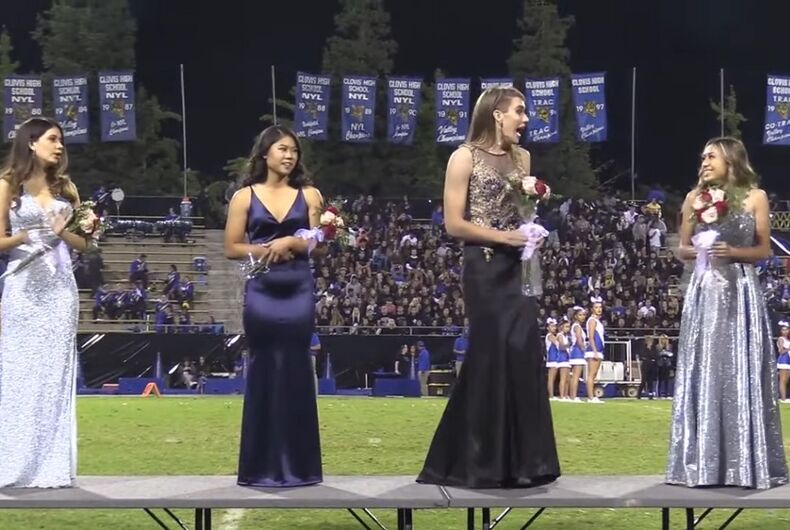 Trevor Meyer was announced as Homecoming Queen during a football game.Photo: Screenshot/YouTube

Trevor Meyer, 16, is a senior at Clovis East High School near Fresno, California. They are nonbinary and say they don’t have a pronoun preference.

Their first three years of high school, Meyer was nominated for the male title of “homecoming prince.” They lost each time.

But two years ago, they started to be more open about identifying as nonbinary, so they thought they should do something different this year.

So they decided to run for homecoming queen. They asked their friends about it and the friends nominated them. They were picked as one of the four students that the school could vote on for the crown.

“Leading up to the announcement, my heart was racing, and I was on a roller coaster of emotions,” they said. “I just think it’s important for everyone to step up and be themselves.”

“The crowd was chanting his name so loudly, everything was buzzing,” said Meyer’s sister. “From the moment they announced him, you couldn’t even hear anything other than the crowd’s cheers.”

The students ended up voting for them and they beat out three cisgender girls for the crown.

“Thank you so much,” Meyer said at the coronation during a football game on October 4. “I’m shaking. I’m so excited. It means there are people out there who care and support and know about what I’m doing.

“I’m just so thankful to have this opportunity. I think it means we’re taking a step in the right direction.”

“Honestly, I respect it,” said last year’s homecoming king Shawno Roberts. “That’s who he is as a person. I respect it.”

Meyer was paraded in a convertible as fireworks went off and the students cheered.

“I hope this inspires other people,” they said. “Step up and be themselves, because look at the support you can get.”