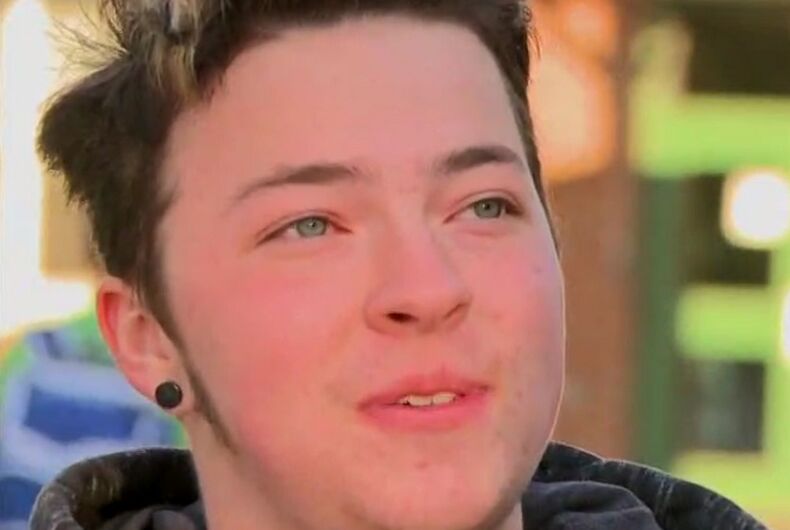 A boy in Maine who was kicked out of his school for being transgender has been elected homecoming king at his new school.

Stiles Zuschlag started transitioning in 2015 when he was a student at the Tri-City Christian Academy (TCCA) in Somersworth, New Hampshire. He had been attending TCCA since he was in kindergarten and he was a good student, on track to be valedictorian.

In eleventh grade, he was calling into a meeting with TCCA administrator Paul Edgar and told to keep his transition a secret, and he said he would.

“I’ve been there since kindergarten,” he told WCSH-6. “That’s my home. That’s my family.”

He agreed to use the girls’ bathroom, play on the girls’ sports teams, and not talk about his gender identity on social media.

But when he started hormone replacement therapy, his transition became more obvious. Just before his senior year started, he was called into another meeting with Edgar.

This time, Edgar gave Stiles three options. He could stay at the school if he confessed his sins, stopped taking testosterone, and attended “Christian counseling” to change his gender identity. He could be home-schooled for a year under the supervision of TCCA. Or he could leave.

“It felt brutal to me. I can’t believe I grew up under you. I looked up to you and now you’re pushing me away like a problem. Like I’m a disease.”

Stiles, who said that he felt he “didn’t know how to do or be a female” since he was little, chose to attend Noble High School in North Berwick, Maine, a public school.

Administrators say that he was not the first trans student they’ve had at the school. When he registered, he was asked his preferred pronouns and which restrooms he wanted to use.

And just a couple months later, he was elected homecoming king. “My heart kind of dropped” when he heard the announcement, he said.

When asked about his relationship with God, he said it was “stronger” because of what happened. “It’s like he wanted me to be here instead.”

TCCA doesn’t take any funding from the state of New Hampshire, and no federal law prohibits private schools from kicking out students because they’re transgender. A state attorney said that what happened was “heart-breaking,” but perfectly legal.

51 people arrested at a gay spa in Indonesia