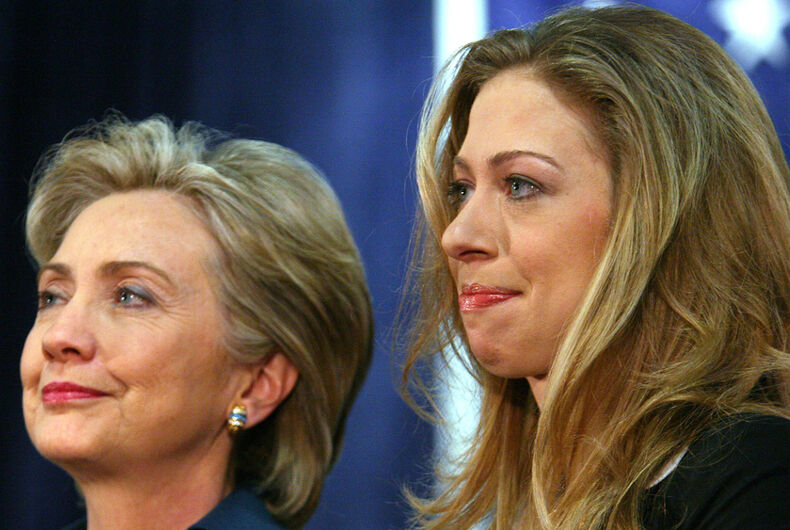 Recently 71-year-old Hillary Clinton and her 39-year-old daughter Chelsea spoke with The Sunday Times about co-authoring The Book of Gutsy Women: Favorite Stories of Courage and Resilience. The book features 100 women, including Virginia Delegate Danica Roem (D), the first out trans person elected to a state legislature in the U.S.

What’s remarkable (and kind of upsetting) about the interview is that interviewer and English journalist Decca Aitkenhead used transphobic framing by asking “if someone with a beard and a penis can ever be a woman.” Chelsea enthusiastically responded, “Yes!” while Hillary seemed to squirm a bit.

“Errr,” Hillary said. “I’m just learning about this. It’s a very big generational discussion, because this is not something I grew up with or ever saw. It’s going to take a lot more time and effort to understand what it means to be defining yourself differently.”

Chelsea then piped up, “I am thrilled by the [U.K.’s National Health Service’s] decision [to assign trans patients to wards matching their gender identity] because how can you treat someone if you don’t recognize who they feel and know in their core they are?”

She added, “And I strongly support children being able to play on the sports teams that match their own gender identity. I think we need to be doing everything we can to support kids in being whoever they know themselves to be and discovering who they are.”

Aitkenhead then said, “A lot of British feminists of Hillary’s generation have a problem with the idea that a lesbian who doesn’t want to sleep with someone who has a penis is transphobic.” This is an extreme position that few transgender people agree with that people often bring up to derail discussions of transphobia, and it had nothing to do with Hillary and Chelsea, who are both straight.

Hillary responded, “I think you’ve got to be sensitive to how difficult this is. There are women who’d say [to a trans woman], ‘You know what, you’ve never had the kind of life experiences that I’ve had. So I respect who you are, but don’t tell me you’re the same as me.’ I hear that conversation all the time.”

Chelsea reportedly shot the interviewer a dirty look for asking these questions and added that she and her mother never argue about the subject, possibly in an attempt to distance her mother from this transphobic line of questioning.

Aitkenhead wrote, “I get the impression they don’t like to present anything less than a united front to the world.” But that isn’t necessarily why Chelsea shot her a dirty look – she might have been offended by Aitkenhead’s transphobic, leading questions.

Jezebel points out that “The Sunday Times and its sister paper the Times are known for their transphobic coverage as well as for creating a hostile working environment for trans employees,” and that Hillary only began tweeting about trans rights in 2015 and speaking about them while on the campaign trail in 2016.

While it makes sense that Hillary might sympathize somewhat with the prejudices of older trans-exclusionary feminists, her answers reflect that, rather than the outright transphobia espoused by the interviewer.