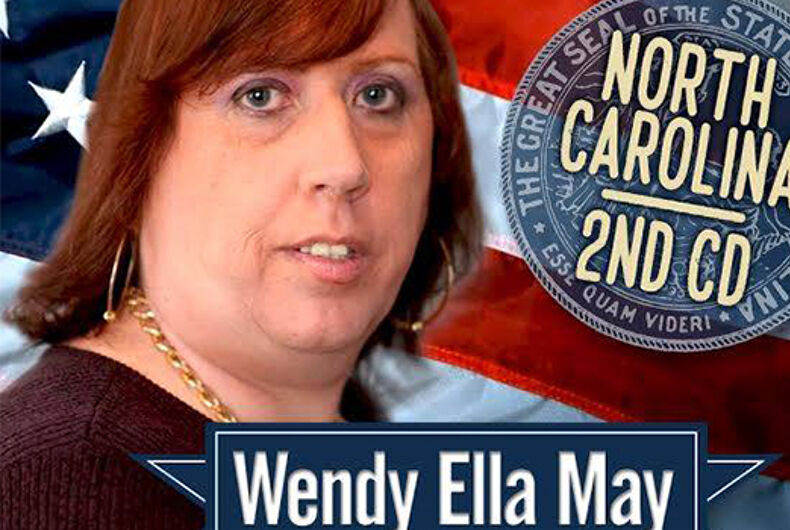 Wendy Ella May is running for Congress in North Carolina against Rep. George Holding.Photo: Facebook/Wendy Ella May

North Carolina has its first transgender candidate for Congress, and she hopes to make headlines that the LGBTQ community in the state can be proud of for a change.

Wendy Ella May, a 55-year-old disabled military veteran, is running on a progressive platform in the race to represent District 2. She faces off against incumbent Republican Rep. George Holding, 49, who first won election into Congress in 2012.

May was a delegate for Bernie Sanders during the presidential election, before eventually supporting Hillary Clinton. She serves as the president of the LGBT Democrats of Johnston County and second vice chair of the Progressive Caucus of the N.C. Democratic Party.

She ran for Johnston County commissioner last year, coming up short but garnering about 33 percent of the vote.

Her platform includes better treatment of veterans, equal rights in the state for LGBTQ people, a living wage, affordable healthcare and stronger public education. It is a vision that differs from what is happening both nationally and in North Carolina, where the state government has gone far-right ever since it was redistricted to give an overwhelming advantage to Republicans.

It also a platform that gives voters a distinct choice. She calls her opponent, who opposed same-sex and voted against reauthorizing the Violence Against Women Act as well as for repealing Obamacare, “probably the complete polar opposite of what I stand for.”

“I am a very strong supporter of women’s rights, LGBT rights, and most of all the way we treat our veterans,” May told LGBTQ Nation.

“We have approximately 700,000 veterans in the state of North Carolina, and we have limited medical facilities to take care of them,” she said.

May also called herself “a strong advocate for the environment.” She noted that much work needs to be done as we are under a president who she says “has tried to destroy anything that stands for protecting our environment.”

She also said that she supports “a livable wage” that “brings dignity to what you do.” She added that eastern North Carolina has been neglected.

Advocates are pushing for more members of the LGBTQ community to run for office in order to help counter the right’s attempts to strip away our rights.

As May likes to say, “If you are not sitting at the table you will be on the menu.”

“Washington, D.C. needs a voice that will represent all of the people,” she told us.

“I believe that this is the opportunity right now to bring progressive values to the table,” May said. “As we see the current president saying doing what he’s doing, and Congress doing what they’re doing, now is the only time we have in the next century to bring those progress values forward and to really represent all the people in America, not just the filthy rich or big businesses.”

3 things America can give Mike Pence for his birthday today