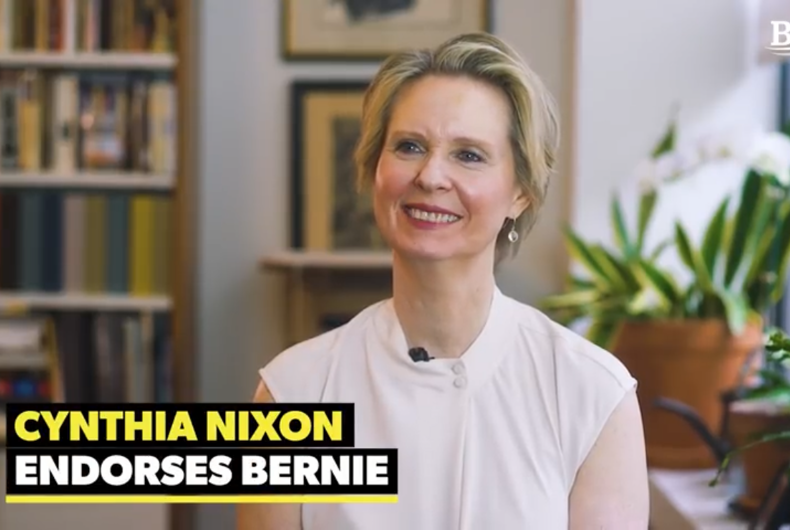 Actress-turned-out political hopeful Cynthia Nixon has announced her support for Senator Bernie Sanders in the 2020 Democratic primary and election for President.

The Sanders campaign released a video of Nixon explaining her decision, along with a statement. Nixon has informed people that she will campaign for the candidate in Las Vegas this weekend, followed by New Hampshire by Tuesday.

Nixon was most known for portraying Miranda Hobbes in the HBO franchise Sex and the City television show and movies, before she ran as a candidate for the Democratic nominee for Governor of New York State in 2018. She was infamously smeared as an “unqualified lesbian” by another out politician, which she used to her advantage. Nixon earned 34% of the vote against popular incumbent and eventual contest winner Andrew Cuomo, running on the slogan “Vote for the homo, not the Cuomo.”

At that time, Sanders declined to endorse her – as did several LGBTQ organizations and established political influences – but endorsed her running mate, Jumaane Williams. Sanders’ snub of Nixon hurt her campaign’s popularity with progressives and overall chances.

Nixon, however, made a significant impact on Cuomo’s governorship, remains an active critic of his administration and has since kept herself involved in politics – whilst acting in two upcoming TV series – Netflix’s Ratched and HBO’s The Gilded Age.

“It seems to me that what you need in a politician is you need someone with a vision,” Nixon opens in her video explanation of her endorsement. “…People don’t vote for somebody who kind of checks a lot of boxes. People vote for somebody that they have a strong emotional connection to the things that person is saying…and that’s what Bernie is offering.”

Nixon continues, “In the same terrifying and muscular way that Trump is a force for so much of what is bad in this country, in this world, Bernie has that same kind of muscularity of vision but for good.”

In 2016 I supported Hillary for President.

But this year, I’m all in for Bernie. His ideas are wildly popular, and he’s our best chance to beat Trump.

We can’t afford to nominate a candidate who will leave voters sitting at home, uninspired. pic.twitter.com/a2DWKxgsJI

“A candidate who is too beholden to big money and the establishment and just basically doesn’t want to rock the boat is never going to be a powerful enough counterbalance to what Donald Trump has to offer. You need someone as vigorous and who is wanting to turn the system upside down,” she concludes in the two-minute video.

Nixon, who also has a transgender son, offers her support to Sanders at a time where he came close to getting a win against Pete Buttigieg in the messy Iowa caucuses, and riding on the momentum that his near-win gives him in the upcoming New Hampshire and Nevada primary contests.

And there is nobody that has those three qualities in greater abundance than Bernie Sanders.” –@CynthiaNixon pic.twitter.com/X5Y9S8XrUP