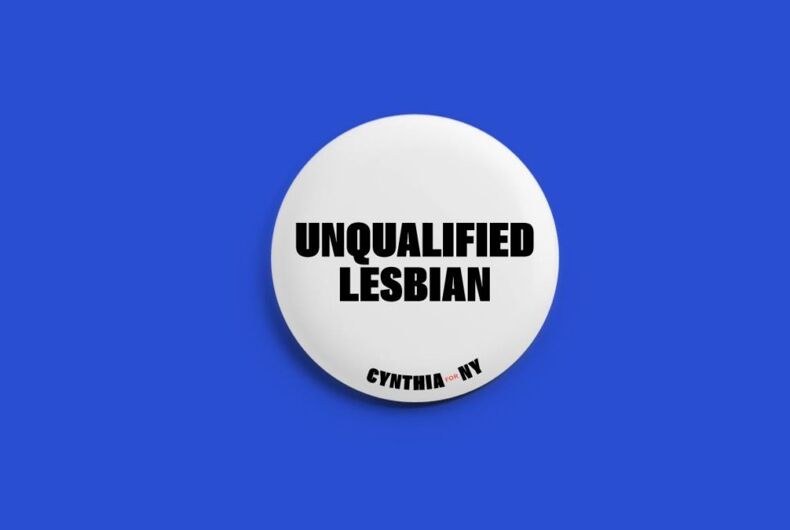 Sex in the City actress turned political wannabe Cynthia Nixon is trying have an Elizabeth Warren moment by capitalizing off former New York City Council President Christine Quinn’s derisive description of her as an “unqualified lesbian.” Quinn, known as a political fighter, is also a lesbian.

The two women have had bad blood since 2013 when Nixon endorsed Bill de Blasio, who ended up beating Quinn to become the mayor of New York City. Nixon announced her candidacy for New York governor earlier this month.

Now Nixon has turned the offhand comment into a campaign slogan and is now selling pins on her campaign website that say “Unqualified lesbian” for a $5 contribution.

Nixon quickly shot back at a campaign event at the Stonewall Inn, opening her speech with, “Welcome, unqualified lesbians, and qualified ones too! Welcome to the trans community, welcome to queer people of every stripe, and our beautiful straight allies.”

Related: So… is Cynthia Nixon a lesbian now?

Quinn subsequently clarified her comments in a four-part Twitter statement. “To be clear, Cynthia Nixon’s identity has no bearing on her candidacy and it was not my intention to suggest it did,” Quinn said. “I want to be clear about that. I would never, EVER, criticize someone because of their identity.”

National Organization for Marriage head compares himself to Christ for Easter