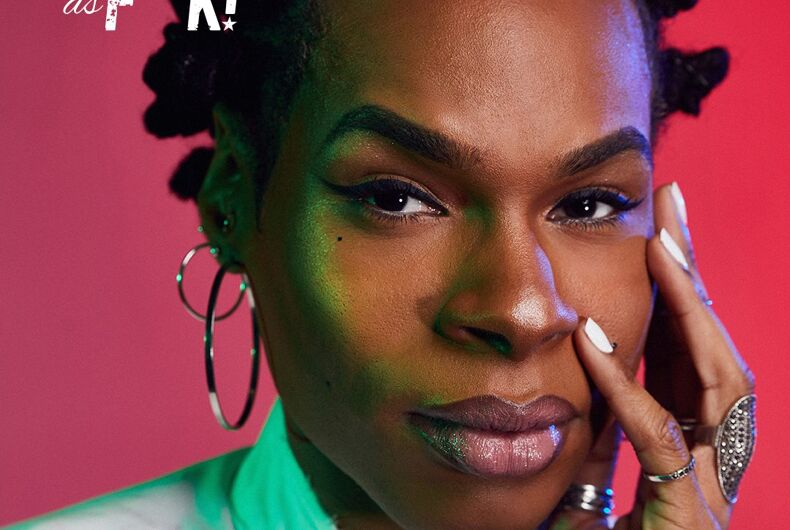 B. Hawk Snipes for BET's "Queer as F**k!"Photo: Provided by BET Social

The digital arm of the Viacom/CBS-owned channel is telling the story of several Black people leading in their communities or industries through several “original editorial series.” Black LGBTQ people are prominently featured throughout the various projects.

Related: Republican wants to cut funding from “Sesame Street” because a gay man will appear on it

Each day throughout the month of February, BET’s social networks will highlight a different Black LGBTQ people and their work, in their own words.

#29DaysofQueerExcellence Meet: ICON Freddie LaBeija of The House of LaBeija.

The Black Queer Excellence campaign also serves as the first release from a new social franchise, Queer as F**k. This will also include a 3-part documentary series and other original programming, BET announced in November.

#29DaysofQueerExcellence Meet: @classicnewwave
I remember when I was scared to be myself. Not seeing anyone who I felt like I could relate to in school and in work made it harder because I felt I needed to tone myself down just to make people comfortable. F**k that. #BETQueerAF pic.twitter.com/jz7q5xsc58

BET has been criticized before for erasure of, or disrespecting, LGBTQ people in its content – In 2013, transgender media personality B. Scott sued the network for discrimination, and the lawsuit was settled in 2015 – but they have recently made strides to improve in LGBTQ representation.

BET is also including trans Pose actresses MJ Rodriguez and Janet Mock, along with trans 911: Lone Star actor Brian Michael Smith, as one of the trios focused in its upcoming “Black Excellence Trilogy” video series.  Fans of the network previously criticized their failure to invite cast members of the FX drama series or honor the show during the 2019 BET Awards this past summer.

In November, Rodriguez was part of the opening of the BET Soul Train Awards.

In addition to their #QueerAF programming, Daily Show correspondent and comedian Jaboukie Young-White will be included as one of the members of BET’s “The Future 40” List, presented by Walmart. “The Future 40” names entertainers, writers, entrepreneurs, and other “of the most inspiring and innovative vanguards who are redefining what it means to be unapologetically young, gifted & Black.”

#29DaysofQueerExcellence Meet: Chana Ginelle Ewing …I've been an entrepreneur for over a decade, which enables me…

To keep up with BET’s recognition of LGBTQ people through Black History Month, follow the hashtags #29DaysofQueerExcellence and #BETQueerAF. You can also follow the network @BET on all major social media websites and keep up with the hashtags #Future40 and #BlackTrilogy for their other series of posts.

#29DaysofQueerExcellence Meet: @kendrickdaye . . . In the current climate where black queer antagonism, transphobia, and homophobia is a constant and very real threat it’s important for me to create work that imagines a future where black queer life is prosperous, thriving and valued. Through my art, I explore the question ‘what does it mean for black queer people to have a future?’ What does that LOOK like? As imaginative as I can be visually, I am a realist. I have no grand illusions that art will spark a revolution. Not at least anything in a tangible sense. But I have been witness, firstly in myself but also in others, to the profound changes art can have on an individual's perception, mood, and life. There’s a void of work that does this that centers black queer life. I create work because I want to see images that laud, legislate and promulgate on the behalf of a black queer utopia. Liberation and freedom are alive and well-contented bedfellows in the worlds I imagine. My personal identity, a black queer man, stands as the pre-eminent public place of judgment that informs my work. Through my varied and diverse approaches to making art; art direction, bespoke design, music, and most notably collages both digital and analog I aim to add images to the narrative of black queer media that define beauty on my own terms. Images that see roses through Baldwin-colored sunglasses. Images as pastiches – whole in-and-of themselves but even more so in the context of one another. Images of everything in one place, in distorted focus, for no other reason than for you to see it. #BETQueerAF . . . Photography by: @jocelyn_prescod Makeup by: @fabfacesbyaigner

"My goal is to broaden perspectives and offer space for reflection and more expression. Using voice creatively and being vocal about the things that occupy the lives we live catalyzes personal reckoning and healing." #BETQueerAF pic.twitter.com/o0kwSgrZET