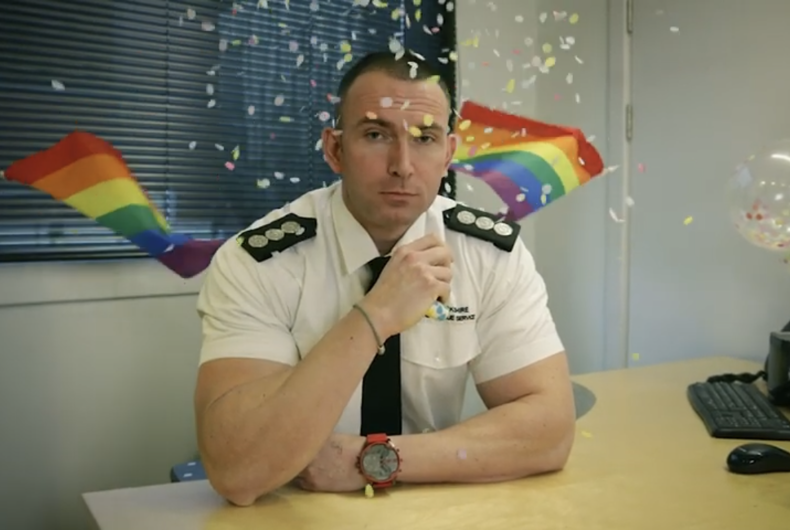 This time last year, the South Yorkshire Fire & Rescue received several hateful messages from people online, because it changed its profile picture on Facebook to a version of its logo that incorporated the Pride flag. This was South Yorkshire’s way of recognizing LGBT History Month in England.

This year, the firefighters that serve the English community decided to issue a response to all of those people. They published a video on their YouTube, where various firefighters read the comments that the group received.

You hear typical anti-LGBT rhetoric in the 90-second video “based on real comments,” but as the firefighters read them, they’re actually doing the “harmful” things the comments claim they were doing by posting the Pride flag.

For example, the video opens with a firefighter saying “getting involved in the gay community is not correct,” as she hands out informational flyers in a plaza. Another scene shows firefighters saving a fake cat from a tree, whilst one of them says, “let’s see pictures of firefighters doing their job!”

Another good comeback is on the comment of “more box ticking”, suggesting that the department was trying to be politically correct. In response, a Fire & Rescue employee actually checks off “LGBT+ Pride” on a large checklist which includes “Saving Lives”, “Fitting Smoke Alarms”, and “Visiting Schools” – all already checked off.

One employee reads the comment, “I don’t see or understand why you feel the need to celebrate.” Pride flags begin waving behind him, confetti is released and he blows a party horn right after.

In between these scenes, the video explains why it’s actually important for them to support LGBT people. “LGBT+ people still face prejudice at home and at work. We celebrate LGBT+ pride in solidarity with all those we serve and employ.”

Their final comeback reads, “Fires don’t discriminate, neither do we” – which became the title of the video.

Chief Fire Officer Alex Johnson explained in a statement, “we fully expect the video will have a mixed reaction but some of the comments we received last year were awful and totally unacceptable.”

“We’ve produced it for two reasons – firstly, we wanted to support the month and let our staff, and communities, know that we are proud to employ and serve them, regardless of those comments,” Johnson explains. “And secondly we wanted to demonstrate that we are a genuinely inclusive organisation that values the contribution of all our staff, whatever their LGBT+ status.”

Watch the full video below. If you enjoy it, then good news: South Yorkshire Fire & Rescue promises more to come to celebrate for the rest of LGBT History Month.

Oh, and South Yorkshire’s Pride flag logo is back. No hateful comments (yet).

Last year we got a load of abuse when we added the rainbow flag to our profile picture.

Thanks for the comments… 👍#LGBTHM2020 pic.twitter.com/kwzAvKWUjq

After Pete’s Iowa win, his rivals are attacking him for his limited experience