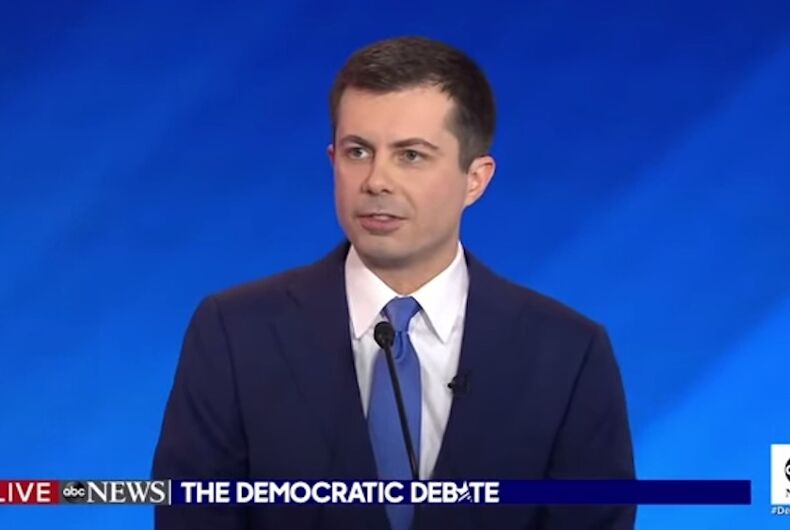 Pete Buttigieg emerged from the Iowa caucuses as a self-declared winner — although Bernie Sanders is very close and also declared victory. But, as Buttigieg has learned from the debate in Manchester, New Hampshire last night – and again from an ad by Joe Biden – being the frontrunner also makes you a big target.

Now, Buttigieg’s rivals are homing in on what they believe is one of his biggest weaknesses: his relatively limited experience.

Related: Trump promises to end AIDS in 10 years. Experts say his policies are thwarting that goal.

Buttigieg has been trying to spin this as a positive, positioning himself as a fresh face unencumbered by experience in a Washington that everyone hates. His opponents are having none of it.

Of all, Sen. Amy Klobuchar appeared the most peeved that Buttigieg has gotten as far as he has. At the debate, she ripped into Buttigieg after the ex-mayor suggested that while past achievements were important, they weren’t completely essential because “this moment is different.” Klobuchar told Buttigieg, “We had a moment the last few weeks, Mayor, and that moment was these impeachment hearings,” she noted.

Then she went in for the kill. “But what you said, Pete, as you were campaigning through Iowa as three of us were jurors in that impeachment hearing…you said it was exhausting to watch and that you wanted to turn the channel and watch cartoons,” Klobuchar said. “We have a newcomer in the White House and look where it got us. I think having some experience is a good thing.”

Klobuchar didn’t make the quote up. Buttigieg did tell an Iowa college audience that people were exhausted by watching Trump and his impeachment hearings, and they just want to “switch it off and just watch cartoons or something.” The response to this comment by Klobuchar managed to both slam Buttigieg for making light of  impeachment, but also take an implicit swipe at this age.

That wasn’t even the best shade thrown at Buttigieg of late – that distinction goes to former Vice President Joe Biden. Buttigieg’s success in Iowa came at Biden’s expense, since both him and Klobuchar are jockeying for the crown from the moderate sector. After pulling his punches, Biden launched his first negative ad of the season today – and it was directed at Buttigieg and his limited experience.

The digital ad contrasts Biden’s experience as Vice President of the United States with Buttigieg’s as mayor of South Bend, Indiana. Unsurprisingly, the ex-mayor doesn’t come off well in the comparison. For example, the ad says that while Biden was leading the Obama administration’s work on the Affordable Care Act, Buttigieg “installed decorative lights under bridges, giving the citizens of South Bend colorfully illuminated rivers.”

The ad also ironically states that both candidates have taken on “tough fights.” In Biden’s case, it was getting a nuclear deal with Iran. In Buttigieg’s, it was “negotiating lighter licensing regulations on pet chip scanners.” The ad goes on to compare Biden’s role in the economic recovery from the Great Recession with Buttigieg’s efforts to “lay out decorative brick” on the sidewalks of South Bend.

The ad is a sign that Biden (who recently made changes to his internal staff) takes the threat from Buttigieg seriously. If Buttigieg had finished fourth in Iowa and Biden first, there would be little need for the ad.

This also serves as a test, previewing what Buttigieg can expect if he does become the Democratic nominee for President. The primaries are a way of testing candidates, probing for their flaws. As the former mayor of a small midwestern city, Buttigieg is open to criticism that he just doesn’t have enough experience for the most powerful office in the nation.

Whether or not you think that criticism is justified is a separate question, but it’s probably a more potent point of attack than Buttigieg’s courting wealthy funders in a wine cave.

We’ll see on Tuesday night whether these punches actually landed with New Hampshire voters. Even if Buttigieg does well, these criticisms won’t go away any time soon.

Billy Porter reads Trump, but also gives us hope, in LGBTQ State of the Union address