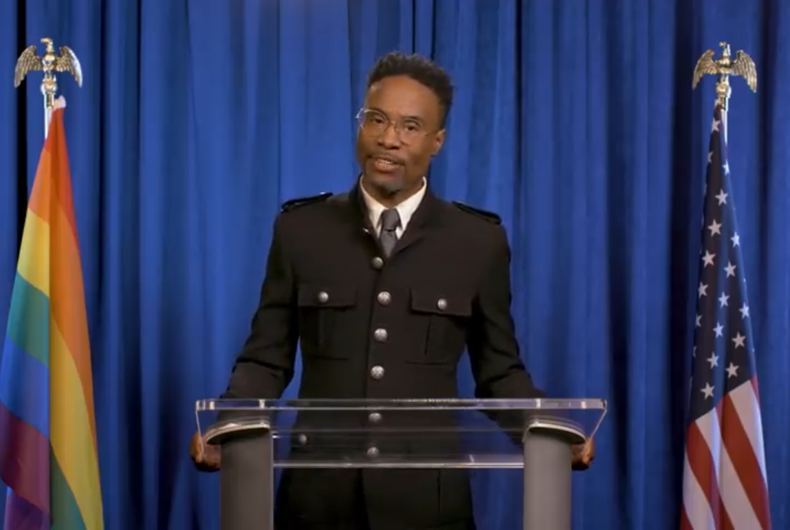 Entertainer Billy Porter addresses the LGBTQ community and Americans for the LGBTQ State of the Union, 2020.Photo: Screenshot via YouTube

Released by Logo TV, the nearly-eight minute speech features Porter addressing on several issues that are of importance to LGBTQ people – and largely ignored or caused by our current political leaders. The address should be commended and remembered for years to come.

Related: Black history is now. I’m part of it & so are you.

“My fellow Americans, my name is Billy Porter. I’m an activist and a proud member of the LGBTQ community,” Porter opens with two flags flanking him – the American and Pride flags. “It is my privilege to join you today.”

“Last year, I told you that the State of our Union was strong, and while it certainly has been battered, our union is far from broken,” Porter tells us.

He begins by addressing the harm caused by Trump during his Presidency – “Donald J. Trump has painted himself as a friend of the LGBTQ community, while revealing his true colors at every malicious turn,” Porter alleges. He cites Trump’s ban of transgender members of the military, legalization of healthcare discrimination against LGBTQ people, the ‘gutting’ of LGBTQ and homeless social services funding, and his appointees to federal judiciary positions as proof.

Porter also talks about the height of hate crimes against LGBTQ people, specifically noting that 2019 was the deadliest year on record for transgender Americans. “This heinous violence against trans people, which disproportionately affects trans women of color, is nothing short of an epidemic. We must confront it as a community, and a country.”

Yet, unlike most speeches aimed at the LGBTQ community, Porter doesn’t end there. “But let’s not get it twisted – queer rights are far from the only rights under attack.” Porter cites the ‘normalization’ of white supremacy, the migrant border crisis, and the ‘injustices’ of the criminal justice system, among several other issues affecting all Americans and that must be addressed.

Porter, who will appear in an episode of Sesame Street, addresses many desires from Republicans to cut funding to programs that allow us to hear from voices such as Porter’s, and benefit the public.

“The fate of the entire country is in the balance,” Porter states. “I know it sounds dramatic – but if now is not the time for drama, child, when is?”

After naming several positive developments in the country, including Pete Buttigieg’s campaign for President and the push to ratify the Equal Rights Amendment, Porter concludes that “we are witnessing true progress.”

While highlighting the achievements of LGBTQ people in culture and entertainment, Porter announces: “The category is, living our best lives. On and off screen.”

In the end, the actor and entertainer gives us hope by once again recognizing our plights, but also commending how far we have come. “We may have a tough fight against us, but I know we can win it! We have no other choice but to win it….So, love one another, take care of one another, secure the future for those who will inherit it.”

After Pete’s Iowa win, his rivals are attacking him for his limited experience