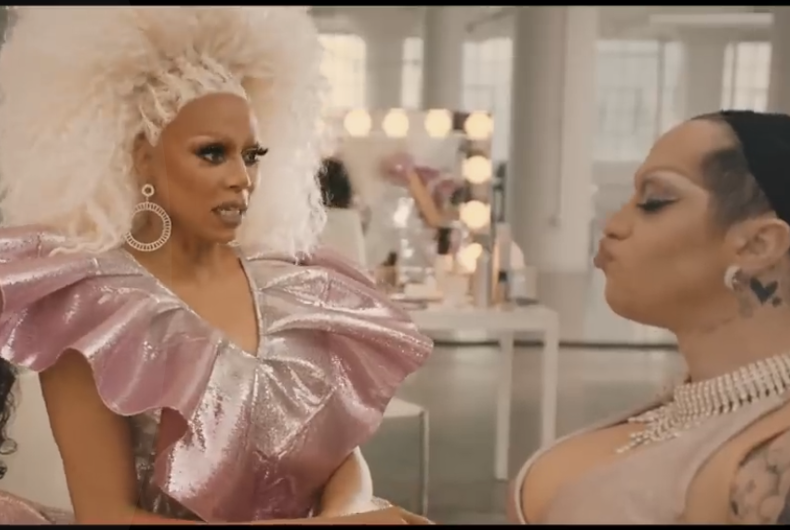 RuPaul, trying to transform 'Chad' (Pete Davidson) into the future of drag for a sketch on Saturday Night Live.Photo: Screenshot via YouTube

RuPaul took the stage to first Saturday Night Live for the first time last night. The RuPaul’s Drag Race host and upcoming star of the Netflix series AJ and the Queen hosted the 13th episode of the 45th season of the legendary NBC sketch show, paired with musical guest Justin Bieber.

The question of the night was whether RuPaul would appear in drag during the show, and while he did not for most of the night, he did for some sketches, and his drag persona Monster even made an appearance.

But before RuPaul could take the stage, the show’s cold open was a sketch mocking everyone involved in this week’s Democratic Presidential debate in New Hampshire. Colin Jost played out candidate Pete Buttigieg, who declared, “They’ve been referring to me as Mayo Pete, but I assure you I’m not that spicy.” Jost as Buttigieg jokingly asked for ‘#WhiteObama’ to start trending on Twitter – and sure enough, it is.

Bowen Yang, the first out actor to be a featured cast member on the show, played candidate Andrew Yang and stole the cold open in his few moments in character, alongside Jason Sudeikis as Joe Biden, Kate McKinnon as Elizabeth Warren, and Larry David as Bernie Sanders, among others.

Now, on to the host. Here are the best moments RuPaul had in last night’s episode:

Ru kept things safe in his opening monologue, explaining what he does and what RuPaul’s Drag Race is, to ‘those who aren’t familiar’ – but not without saying, ‘how dare you.’ Wearing a pink suit, RuPaul says “some of you may be surprised to see me out of drag, but rest assured, I am wearing my grandmother’s pants.”

RuPaul ‘reads’ to the kids

The best live sketch of the night was easily ‘The Library’, which featured RuPaul as himself visiting a San Diego public library to ‘show’ the kids how to read, but the library and its guest clearly had different definitions of ‘reading’. “The Library is open!” RuPaul declares, putting on his reading glasses and giving some to the kids and their parents.

RuPaul makes fun of several children’s book covers – ‘reading them to filth’, as Ru says – such as Kay Thompson’s Eloise, Madeline by Ludwig Bemelmans, and The Secret of the Old Clock by Carolyn Keene. RuPaul then helps the children learn how to read, saying that “a well-timed read is going to save their little booties on the playground.”

“Reading is what? Fundamental,” the room declares.

The Eiffel tower is not in the woods just killed me https://t.co/Yac08lIPTF

Last, but not least, Monster finally shows up in a taped sketch when RuPaul is photographing for the cover of Drag Magazine, when she complains it’s “redundant.”

“Where’s the next generation? Drag needs someone new, someone…like that,” she says as she turns her attention to ‘Chad’, played by Pete Davidson, who has never done drag, but “just weed and pills.”

Once RuPaul is left with the ‘future of drag’, he brings the queen out of Chad, teaching him how to tuck – “you need to tape it down and back, not up and front” – get the look, and beat his face ‘to the gods’. Finally, Ru teaches Chad how to feel the fantasy, and get a song that will “speaks to the new you, the queen that you really are…and lip-sync for your life!”

In the end, Chad does not know how to walk in heels and decides being a queen is not for him. As RuPaul sadly watches the ‘future’ of drag walk away, Chad says “Bye, Rupule,” and struggles to walk away.

At the end of the episode, RuPaul says his farewells to everyone, reminding the audience that “if you can’t love yourself, how you gonna love someone else?”

But the moment that would have made the night perfect – a sketch featuring RuPaul and Bowen Yang as dueling coal miners – was unfortunately, cut for time. Luckily for us, it’s now up on YouTube – so get into it, girls!

Billy Porter reads Trump, but also gives us hope, in LGBTQ State of the Union address