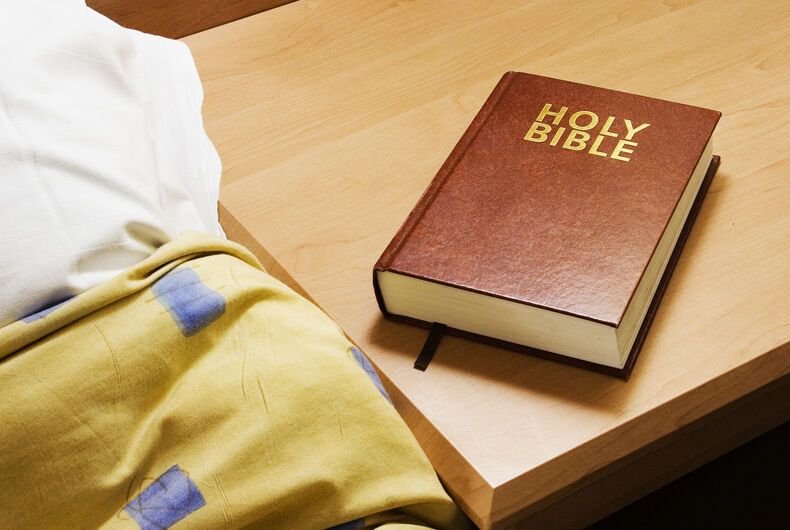 Many Christians feel compelled to tell queer folks that they are living a “sin” that is “offensive to God.” A common response is, “Then why did He make me this way?”

The answer most often received — in one form or another — is “it is a test of faith” for them to deny themselves love and “embrace God.” This goes against the very fabric of Christianity.

Related: You cannot be pro-life & anti-LGBTQ

Science is increasingly showing that people who identify as gay, bi, trans, or other ‘non-conventional’ orientations have actual physical differences in the way their brains are wired. They cannot change the way they feel, if studies being conducted are presently accurate.

The Bible teaches that God will never ask more than you can give — even if you require God’s help in order to give it. You might be tested but, with faith and God’s help, you can succeed.

The civil rights of LGBTQ people are a test of faith, but not for the queer folk themselves – a test for Christians, which many are failing.

Christians love to refer to the Bible as the ‘Word of God’ that is the final authority for all religious viewpoints, and there are specific words in one section that they use to rationalize their view on LGBTQ identities. To which I must always ask, “But which version of the Bible?”

Wikipedia shows close to a hundred different versions of the Bible in English alone. Most of these derive from either two texts known as the ‘Latin Vulgate’ and the ‘Masoretic Text’, or mostly previous derivations of those two texts, effectively meaning that every modern version of the Bible originate with those two sources. In turn, the two ‘origin’ texts were derived from lost texts that were themselves derived from yet another lost text. The Masoretic Text has a third known derivation in its history.

These were created by men, not God. Thus, human biases and failings of the time are introduced into the texts.

That said, the overall sense of the Bible is likely true to the originals. But, like the child’s game of “telephone,” even the best of intentions can produce errors when processed through so many fallible humans. Therefore, it is critical for Christians to listen more to God than to the Bible.

Since it is difficult and rare – absent burning bushes and stone tablets – for God to speak in plain language, Christians must trust that He speaks to us in feelings and intuitions, signs and portents.

By using the Bible as a guide rather than a step-by-step manual, God may be heard, despite the interference.

If we approach it as a whole rather than line-by-line, the Old Testament merely establishes the basic rules of behavior between people. Of all Ten Commandments, they can be boiled down to effectively two: ‘respect God’ and ‘be nice to each other.’

Jesus taught that love and kindness should extend to even those unlike ourselves. Where the Old Testament addressed ‘respect God’ as the primary message, the New Testament strongly reinforces that kindness was the secondary message from God. The directive is made plain: love one another, no matter what differences you may have.

It’s also important to note that God is not yet finished with His teachings. At the same time that the LGBTQ community has ventured out of their closets and started asking for equal rights, the scientific community has begun to discover that, contrary to previously held beliefs, evidence points to the queer community not choosing to be the way they are—God made them that way with physical differences that can be seen.

So, if God never asks for more than you can give — it makes no logical sense that God would intend a mere mortal to change the very fabric of how God made them. It is impossible, and God does not ask us to do the impossible. He rewards obedience with happiness; that is consistent in all books of the Bible. Yet, denying their God-given natures does not make queer folks happy. If you listen, this is God telling us, “This is not what I want from you. You misunderstood My message.”

Why, then, did He make queer folks this way? There was a test of faith in Jesus’ time as people were asked to be kind to those unlike themselves. Many failed, and Jesus paid for that.

In this time, the test of faith is not for the queer folks themselves; it is for the rest of Christianity.

Do they believe in God’s secondary message of, “Love one another…even those who are different from you”? Will they obey God’s primary message and respect God by following his direction? Will they accept their neighbors, no matter their differences? Love them as they love themselves and support them in their efforts to find the happiness that obeying God promises?

God is offering Christians the chance to listen to Him, to cast off the nit-picking of specific phrasings of a Bible written, translated, and re-translated by fallible men in order to rationalize their own prejudices.

Once again, Christians are being asked to accept a people whose ‘agenda’ they do not fully comprehend, just like the villagers in the time of Jesus were asked to accept the Samaritans or the Jews or the Greeks.

Christians today are being asked to accept their queer neighbors. Many, when confronted with a LGBTQ person’s ‘agenda’ – acceptance – are failing His test of faith, and congratulating themselves for it.

The public votes to make homophobia a criminal offense in Switzerland