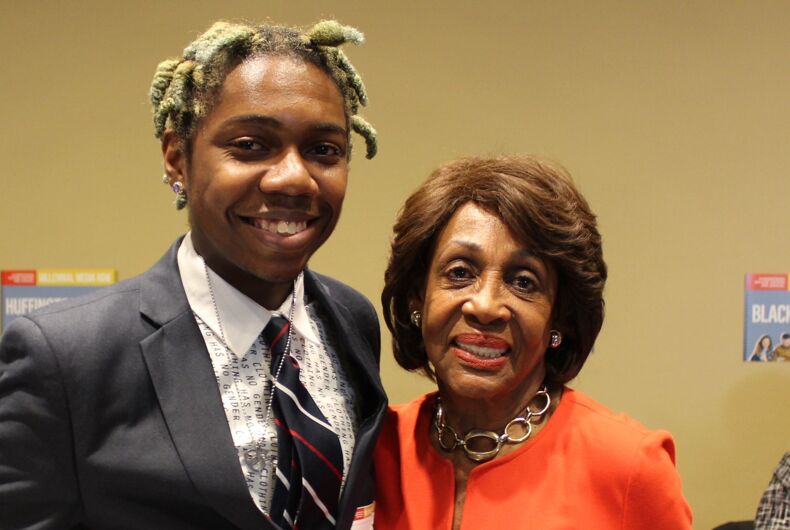 I was honored to be an attendee of Rep. Maxine Waters’ (D-CA) annual Millennial Media Row for the State of the Union. Young members of the media and press were invited to join her and other congressional members and talk to them on various topics.

LGBTQ Nation was the first LGBTQ publication to be included, and a Black, bisexual man was our representative: me. Making history as both a Black and LGBTQ person in the Capitol of the United States, where we have been oppressed for centuries, is not to be taken lightly.

Related: Exclusive: The black trans woman who spoke out at CNN’s LGBTQ Town Hall tells her side

Anyway, catch me live tweeting / live on Facebook from @lgbtqnation during @RepMaxineWaters’ Media Millennial Row and #SOTU watch party in the next hour! pic.twitter.com/JVSbfI41ta

Among the Representatives that spoke with me, out Congressmen David Cicilline (D-RI), Mark Pocan (D-WI), and Mark Takano (D-CA) all discussed how important it is to them to protect people of color, especially Black trans women. Congresswomen Waters and Sheila Jackson Lee (D-TX) stressed that the need to address the constant attacks on LGBTQ people at all levels of government. Rep. Jan Schakowsky (D-IL) imagined the future she’s trying to create for her trans grandson and bisexual granddaughter.

These events and discussions with sitting members of Congress mark immeasurable progress for the recognition of the LGBTQ community and our civil rights. Over the last 30 years, this country wouldn’t commit to recognizing same-sex marriage or combating the HIV/AIDS crisis. Now, not only do we have a gay candidate for president who is married to a person of the same sex, he is a serious contender worthy of praise from a prominent Black member of the House of Representatives.

This was made possible due to the advocacy and trailblazing of LGBTQ people throughout our country’s history.

Just me and my aunt. Something to post, I guess 🤷🏾‍♂️ pic.twitter.com/oowe2ZfMEm

It’s especially significant that during Black History Month of 2020 there are non-Black members of Congress that consider the unfair prejudices that Black people predominantly suffer the most outrageous affront to everything that it means to be American.

Twenty years ago, we had 39 members of Congress that were Black in the 106th Congress. None were Senators.

Since, we have had nearly double the number of Black people serve in Congress, including the man who would go on to serve as the first Black president. Currently, there are 57 members of Congress that are Black, including three senators.

All of this progress is due to the Black people in our country’s past that made this possible in a time when things like this were unimaginable.

Black LGBTQ people paved the way for this – James Baldwin through his unmatched, scathing critique of American society; Barbara Jordan served as the first known Black gay person in Congress; Marsha P. Johnson’s organizing in the wake of Stonewall; Angela Davis withstood several acts of discrimination and oppression due to her political affiliations, including from a sitting President; and the aforementioned Rustin, whose Quaker background influenced Dr. King and others when they held nonviolent protests in the 1950s and 60s.

Now, Black LGBTQ people are able to be the first at something without a white or straight person coming first — people like me and others who were in that room with Rep. Waters.

Yet progress can only lead us to change, not complete it. When it is time for change, people have to make a difference in the now. Black History isn’t just a month – it’s happening right now thanks to the efforts of Black LGBTQ people, past and present.

Throughout Black History Month, you will likely come across several stories retelling the achievements of Black LGBTQ people – and they are important reminders of our progress. Throughout the month, LGBTQ Nation will also be telling the stories of the Black LGBTQ people who work or have worked in the present era to make a change for the future generations.

Rustin, convicted of sodomy in 1953, was pardoned this week by California Gov. Gavin Newsom (D) thanks to a joint effort by both the state’s LGBTQ Caucus and Black Caucus. In his honor, I’ll leave you with a quote of his, this one written in 1969 to youth in Cleveland, Ohio.

“If we desire a society in which men are brothers, then we must act towards one another with brotherhood. If we can build such a society, then we would have achieved the ultimate goal of human freedom.”

Oh, and finally, I quote another Black LGBTQ person – Whitney Houston – who once said, “We need a longer month.”