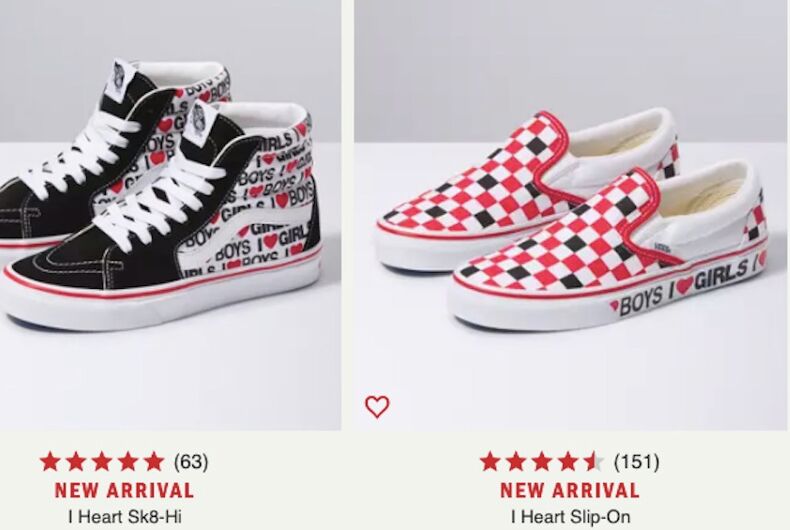 The company’s I HEART SK8-HIs and I HEART SLIP-ONs both have “I ♥ BOYS, I ♥ GIRLS” printed on them, and several of their styles for infants, toddlers, and children feature velcro straps and hearts in every color of the rainbow.

Related: An out athlete wore rainbow sneakers while competing in an anti-LGBTQ country

It’s true that many shoe companies like Adidas, Nike, and Reebok have all released rainbow-colored sneakers in the past, but they usually do so during Pride month and almost never include hearts in their designs.

Vans has also released Pride sneakers in the past. Their 2019 Pride collection not only included slip-on and high-top sneakers with the word “love” written on them in multiple languages and colors, but they also donated $50,000 that year to The Trevor Project, the LGBTQ youth suicide prevention organization.

Vans also has other rainbow-colored footwear available in their store.

During Pride 2019, Converse released a flashy shoe collection with rainbow-colored soles and sneakers in the colors of the transgender pride flag. Adidas offered a colorful variety with multicolor and rainbow accents, and Reebok’s selection had a more subtle vibe with rainbow thread and a small Pride flag in an otherwise understated white shoe.

While such shoes are a fashionable way to show support for LGBTQ people, rainbow-colored sports apparel has become a subtle way for on-field professional athletes to do the same.

During the IAAF World Athletics Championships in Qatar this last year, out queer U.S. competitor Erica Bougard made an impression and a subtle statement by wearing Nike shoes with rainbow flaps over their laces.

In 2013, at least two Swedish athletes at the world championships in Moscow competed with rainbow-colored fingernails to show support for gays and lesbians in opposition to Russia’s anti-gay law (though they risked disciplinary actions for it).