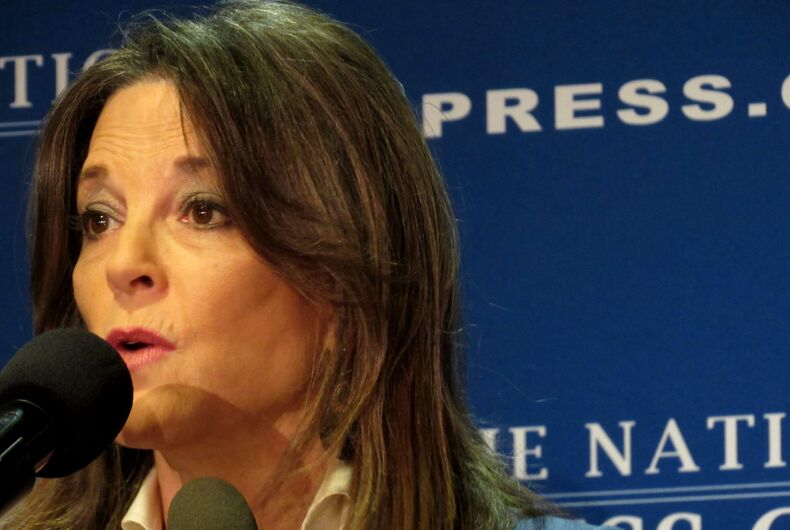 Love didn’t win this time, as self-help guru Marianne Williamson announced today she is ending her 2020 presidential bid. The Democratic candidate failed to qualify for the last few debates and couldn’t capture voters’ attention – or dollars.

Williamson had laid off all of her staff nationwide and floundered in polling. While the novelty candidate made a big splash with her first two debate appearances, her call for a “moral and spiritual awakening” didn’t resonate with voters more interested in punishing President Donald Trump.

Related: Which Democratic presidential candidates will drop out next?

Williamson’s fame for lectures on spirituality coincided with the rise of the AIDS epidemic, and her message of love without condemnation struck a chord in the gay community. Williamson threw herself into the fight against the epidemic, founding the Los Angeles Center for Living, a support services organization for people with AIDS, and Project Angel Food, a food service for housebound people with AIDS.

By 1992, Williamson had parlayed her popularity into a series of best-selling spiritual books, becoming an Oprah-approved celebrity. In 2014, Williamson made an unsuccessful run for Congress from California. Most recently, she’s been on a Love America Tour, which promises “a revolution in consciousness [that] paves the way to both personal and national renewal.”

It’s safe to say that no one has longer or more in-depth ties to the gay community than Williamson. At a time when gay men with AIDS were treated as pariahs, Williamson was one of the few who offered comfort and hope.

Earlier in the primary season, Williamson apologized and clarified years-old remarks that made it sound like she thought HIV could be cured with positive thinking.