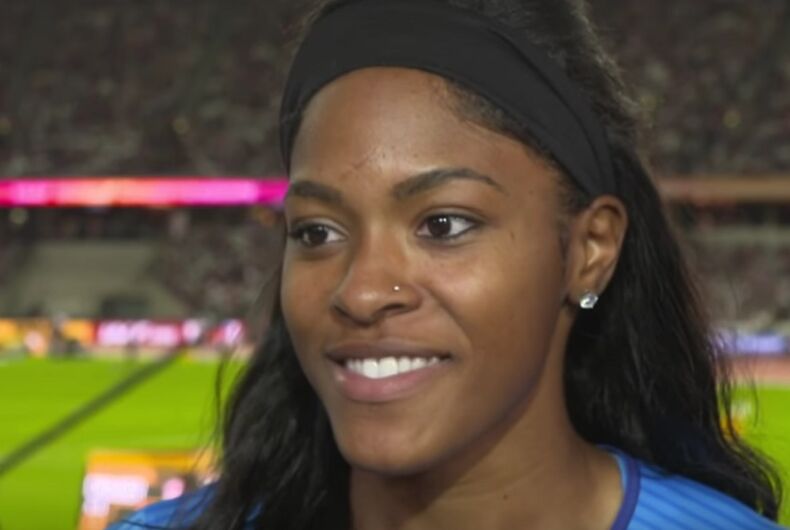 While competing in Qatar at the IAAF World Athletics Championships, U.S. competitor Erica Bougard made an impression and a subtle statement by wearing Nike shoes with rainbow flaps over their laces.

Bougard, who is an out athlete competing in the heptathlon — an event made up of seven track-and-field events — says she wasn’t trying to make a statement even though Qatar punishes homosexuality with seven years imprisonment and even death (though no known executions for being gay have ever officially occurred in the country).

She told the AP, “I put the flag on my shoe and people noticed it, I guess. But I’m not afraid of the consequences. I feel like I’m well protected. [If anything does happen,] I’ll be on the first flight out.”

Wearing rainbows on-field has become a common way for LGBTQ athletes and allies to show support at sporting events.

In 2013, at least two Swedish athletes at the world championships in Moscow competed with rainbow-colored fingernails to show support for gays and lesbians in contrast to Russia’s new anti-gay law (though they risked disciplinary actions for it). In 2016, gay boxer Orlando Cruz wore rainbow trunks in the ring to help raise LGBTQ visibility.

In 2017, U.S. soccer players wore rainbow uniforms for Pride Month, and in 2018, straight wrestler Finn Balor wore rainbow colored shorts while surrounded by an entourage of adoring LGBTQ fans while entering WWE’s WrestleMania event — it was one of the biggest shows of LGBTQ support in a mainstream wrestling event.

Sports apparel retailers have noticed and started marketing rainbow-colored gear including rainbow sneakers from Under Armour and Adidas. Additionally, many U.S. pro-sports leagues have started offering rainbow versions of their jerseys and also host Pride nights each year for LGBTQ fans.

Businesses are getting threats over their rainbow flags. So the community banded together.