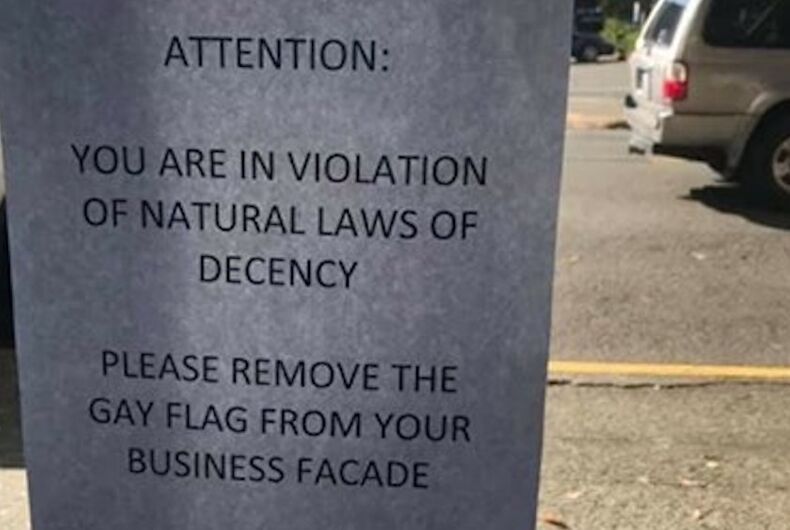 In the city of Olympia, Washington (population 51,609), an anonymous bigot has been posting fliers telling pro-LGBTQ businesses to take down their rainbow flags.

The flier in question reads (in all caps), “Attention: You are in violation of natural laws of decency. Please remove the gay flag from your business facade.”

Four days after the flier was posted on the front of the Gatsby Parlour de Beaute, someone broke the window right next to the salon’s rainbow flag. It’s unclear whether the flier and the broken window are connected, but the business’s co-owner Kelli Tagles told komonews.com that they heard police are investigating the vandalism as a possible hate crime.

Tagles added that several other business fronts — Dillinger’s Cocktails and Kitchen, the film society and Washington Center — also received the homophobic fliers. Police are currently investigating whether any businesses’ surveillance cameras captured video of those responsible for either the flier or the broken window.

The organizers of Capital City Pride have since raised $1,600 off of the vandalism in a show of support — the funds will be used to replace the broken window. It’s actually the second time in less than a month that the salon’s window has been broken.

“It does come as a shock that something like this has happened,” said Kai Abrahamson of Capital City Pride. “We put this fundraiser together, and we’ve raised over $1600 as of right now just as a show of support.”

SAFETY ALERT! Several downtown Olywa businesses with high viz rainbow flags are being threatened, one had their window…

This is Olympia. Like, this is a safe place, this is supposed to be our safe town where a lot of people that I consider refugees from other states [move to]. It broke my heart to see something like that. [We’re not removing the Pride flag.] No, oh no. We’re getting bigger ones.