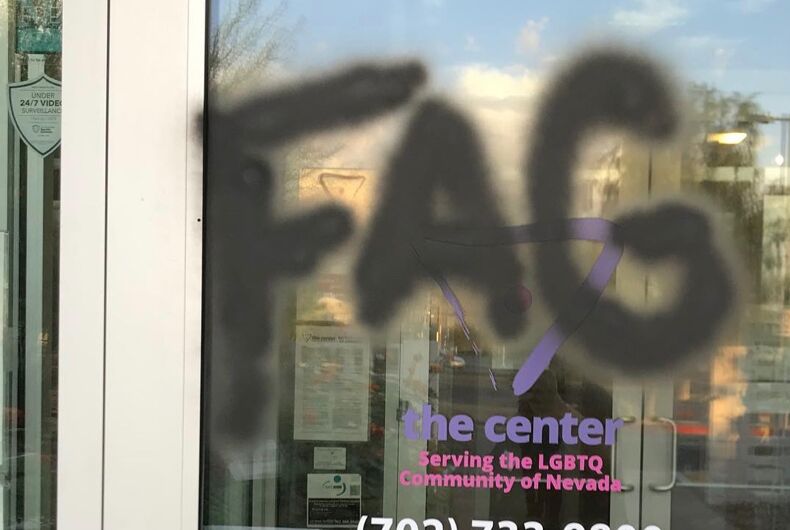 The LGBTQ Center of Southern Nevada has fallen victim to a second attempt by vandals in three months, as their front door was tagged with the slur “fag” in black spray paint across their front door in the early hours of September 6.

The center, located in Las Vegas, had previous been the victim of an arson attack when a palm tree to the side of the entrance was intentionally lit on fire at the end of Pride month. No major damage was reported in that attempt.

The graffiti was discovered by employees when they reported to work this morning.

We woke up today like any other day, but on this day we’re met with a reminder as to why we are still needed. the second…

Posted by The LGBTQ Center of Southern Nevada on Thursday, September 5, 2019

“We woke up today like any other day, but on this day we’re met with a reminder as to why we are still needed. The second act of vandalism to our Center in three months. Hatred will not stop us, it shows us more and more that we need to stand taller, shout louder and love harder. We are The Center,” read a statement on the center’s Facebook page.

Reports of hate crimes such as these have been steadily rising during the Trump years, even as crime overall is declining.

The center reports having a surveillance system and onsite security, and is cooperating with local authorities to capture the person who defaced their front door. Both incidents are currently being investigated.

“I am saddened that The Center was the victim of a hate crime yet again,” said the president of the center’s governing board, Joe Oddo, Jr., on a statement on the center’s website. “While today we focus on what happened on the outside of our building, I am reminded of the amazing work that has occurred and continues to occur on the other side of that door that enhances the lives of the LGBTQ community here in Southern Nevada.”

The center will be temporarily covering the graffiti until it can fully be removed. They are otherwise continuing to provide all of their usual services.