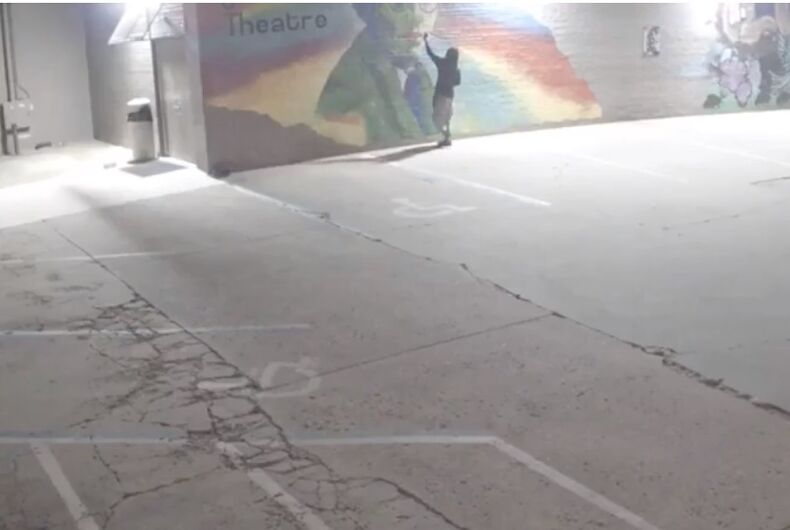 Vandals defaced an LGBTQ mural in Tulsa, Oklahoma on Monday and activists are pointing out that despite the obvious antigay slurs, the act isn’t a hate crime in the state. Among other damage, the word “abomination” was painted across the rainbow-colored background.

While state law classifies property damage with “the specific intent to intimidate or harass another person because of that person’s race, color, religion, ancestry, national origin or disability,” the list does not include sexual orientation or gender identity.

The mural is a portrait of gay playwright and Oklahoma native Lynn Riggs. Riggs was also wrote screenplays for Paramount and Universal Studios and was frequently used as a non-romantic escort for Hollywood actresses including Bette Davis and Joan Crawford.

He wrote “Green Grow the Lilacs,” the basis for the hit musical, “Oklahoma.”

“Lynn Riggs, a celebrated, gay playwright, was not silenced during his lifetime and we will not be silenced during ours,” the group Oklahomans for Equality posted on Facebook. “This is why we continue to fight and speak up against hate.”

The group also publicly released security camera footage of the individual defacing the mural and have asked anyone who recognizes him to contact the center at (918) 743-4297.

On Monday, July 22nd, at 11:14 p.m. the Lynn Riggs Memorial Mural at the Dennis R. Neill Equality Center, the home of…

Posted by Oklahomans for Equality on Tuesday, July 23, 2019

This is the video footage taken from our security cameras of last night's vandalism. It is clear that this is meant to scare and silence our community. What happened last night would be considered a hate crime in thirty-one states, but not Oklahoma. If you can identify this individual, please call the center at (918)-743-4297 or e-mail our Tulsa Police Department LGBT Community Liaison Thomas Bell at [email protected] Oklahomans for Equality, we will continue to stand up and be the voice for equality in our state.

Posted by Oklahomans for Equality on Tuesday, July 23, 2019

Editor’s Note: This story has been corrected. The LGBTQ center is in Tulsa, Oklahoma and not Oklahoma City. We regret the error.

White supremacists are planning another ‘Straight Pride Parade’ in California