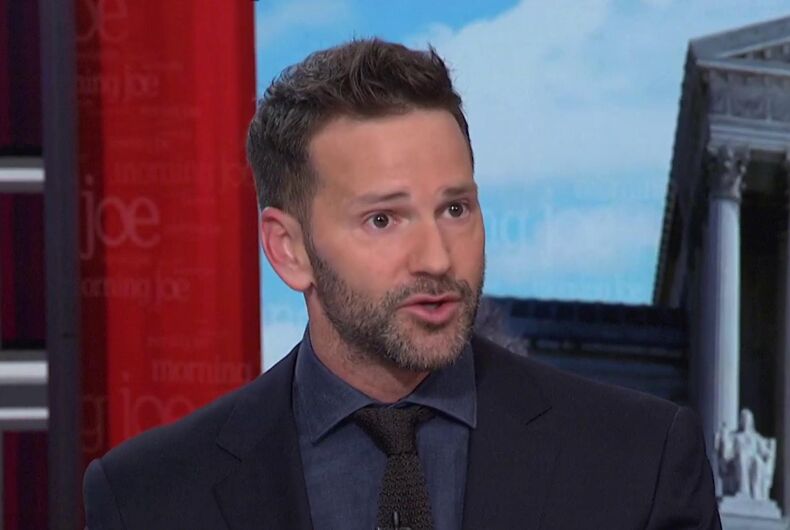 When a friend pointed out that disgraced former Republican Congressman Aaron Schock was in the audience, drag performer Jonnie Reinhart knew he had to do something. Schock, who had a reliably anti-LGBT voting record in office, has been photographed making out with men and stuffing dollars down male stripper’s underwear.

“He’s drawn major criticism from the queer community – rightfully so – for basically being a giant hypocrite,” Reinhart recounted in a video posted to Facebook. “He attended the karaoke night that I host and… I immediately felt like it was my responsibility to say or do something.”

“I’m not a confrontational person,” Reinhart continued. “My heart started racing and I was like ‘Okay, what am I going to do?’ I know a lot of people would have loved for me to just kick him out or throw a drink at him or call him out on the mic or just do something big.”

“But I decided to share a message through song, so I went on stage and I announced ‘This song goes out to somebody who’s in the audience and it goes out to anybody who votes against gay rights.’ And I sang ‘Fuck You’ by Lily Allen. Which was, you know, not a very subtle message.”

“I thought that he would leave,” Reinhart admits, “but he didn’t.”

Reinhart ended up talking with Schock and flat out told him what it would take for the former congressman to “heal some of the harm that he has caused.”

Schock told the performer what it was like to be outed and his family’s reaction, Reinhart says in the video, but declined to share the details beyond that it wasn’t positive. Schock will put out a statement soon, Reinhart says.

“I believe that the LGBTQ+ community should be a safe haven for people that are cast out of their families, but when you’re a public official who has voted against gay rights, we’re not going to welcome you with open arms until you prove you stand with us,” Reinhart opined.

“The current administration is currently putting the LGBTQ+ people and especially trans people at major risk, and if you aren’t fighting against that then… you can’t sit with us.”

On Tuesday night, I had a conversation with Aaron Schock.