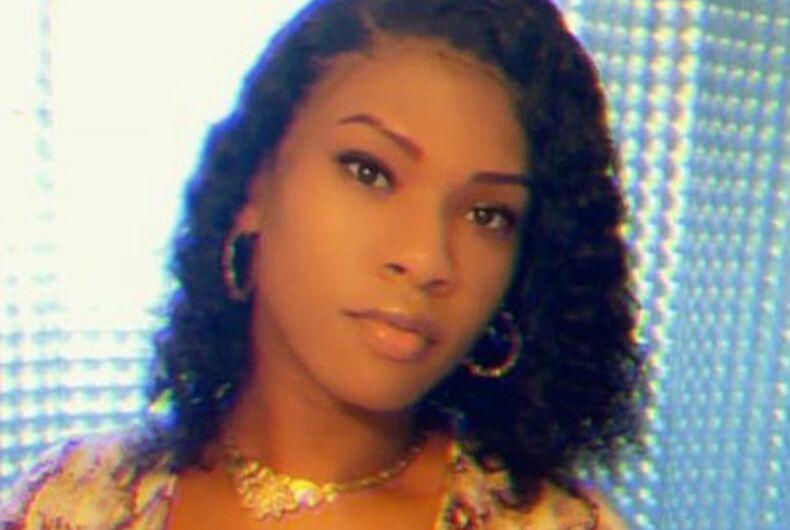 A 23-year-old South Florida trans woman, Bee Love Slater, became the 18th trans woman to die in the U.S. this year when police found her body “burned beyond recognition” in her car — just days before her 24th birthday.

The murder occurred last Sunday night. It took cops two days to finally identify her charred remains. They have no suspect or motive. No arrests have been made.

Related: A transgender teen was shot to death in Baltimore. She’s the 17th trans person killed this year.

WINK News reports, “Although detectives are still investigating what the motives may be, Love’s best friend said he believes the she was targeted because she was transgender.”

WINK spoke with Slater’s best friend, Kinard Wade, about the danger Slater felt leading up to her death:

“Wade [said he knew Slater] for six years and that his best friend was not afraid of anyone who did not agree with her lifestyle.

But Wade said someone wanted to harm her. In text messages the night of the car fire, the victim knew it. The woman told him she wanted to leave town. She was expecting to get in trouble if she stayed here.”

Another friend of Slater’s, Antorris Williams, told Out, “She was willing to sleep in her car until she found a job and things of that nature.”

Following his friend’s murder, Williams said he’s had problems getting the community to respect her and other trans lives:

“One of the issues we’re having is getting people to get her pronouns correct and honor her. But since we live in [the Bible Belt], we don’t have protections for trans women. I know all of the mayors and commissioners, I’ve done some of their campaigns. There’s isn’t any programming or housing in place — they don’t have access to medical care or any treatment so basically where we’re at.”