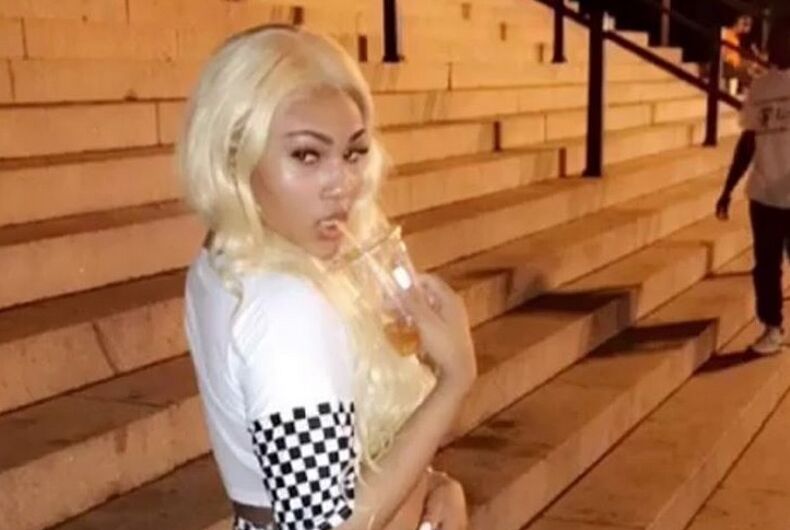 A transgender woman in Baltimore was found shot and killed over the weekend.

The victim, who was identified as 17-year-old Bailey Reeves on social media, suffered multiple gunshots to the chest and was killed as she left a party on Sunday night.

A neighbor heard the gunshots and called 911.

“We were in the kitchen, it was around 8,” the 16-year-old neighbor told WMAR. “We were getting ready for dinner and we heard three shots.”

“We heard a girl screaming ‘My friend! Someone help my friend! Call 911!'”

The neighbor ran outside with her mother and uncle.

“We saw her laying in the middle of the street in a pool of blood, it even traumatized me,” she said. “She was like a year older than me. I couldn’t even imagine if it was me and my friends.”

Officers arrived and took her to the hospital, where she died.

17 y/o Bailey Northeast District Homicide Investigation On September 2, 2019, at approximately 8:05 p.m., Northeast District patrol officers responded to the 4300 block of Parkwood Avenue for a report of a shooting. Upon officers arrival, they located a female suffering from gunshot wounds to the torso. The victim was transported to an area hospital where she later died. Homicide detectives are asking anyone with information to contact them at 410-396-2100 or Metro Crime Stoppers at 1-866-7lockup.

She is the 17th transgender person known to have been murdered in 2019, and the fifth person shot that night in Baltimore.

Scientists have found a gene that gives immunity to HIV

What happens when a man gets pregnant?