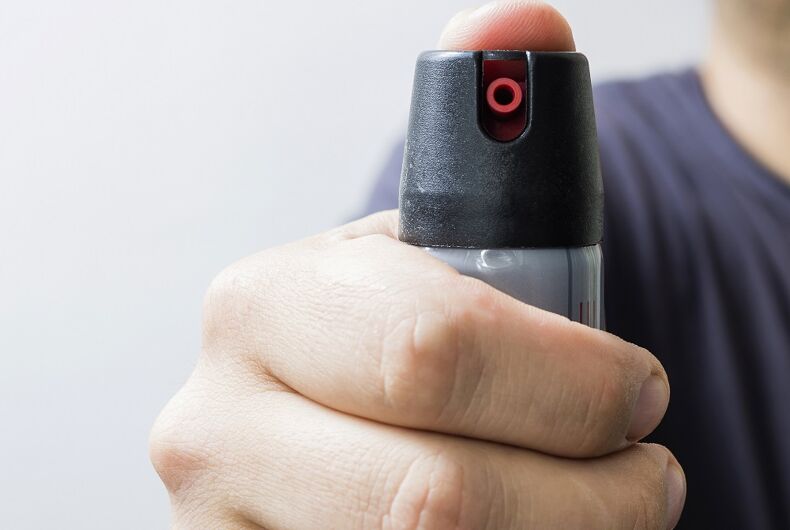 A gay couple says that they were pepper sprayed by an unknown attacker when they kissed in public.

A 23-year-old gay man who works at a nonprofit has been identified only as “Matthew” in the media. He and his boyfriend, who is also 23, were attacked earlier this year and are now coming forward with their story.

Related: Azealia Banks wants to pepper spray ‘a gay man in the face’

Matthew and his boyfriend were out late on January 19 in South London. They said that they were waiting for a bus near a KFC.

“We were being quite affectionate to each other, kissing, holding hands,” Matthew told the Evening Standard.

“Suddenly from nowhere this guy just came and sprayed something directly in my eyes.”

The man told them, “We don’t want your kind around here,” as he pepper-sprayed them in the face.

Detective Inspector Dave Adams said that security footage showed five men were inside the KFC just before the attack. The attacker allegedly pepper-sprayed two of the other men in the KFC before going out and attacking Matthew and his boyfriend.

Bodycam footage from the paramedics also showed that the gay couple worried about going permanently blind from the attack.

But the couple said that they won’t be scared off by the attack.

“For me, nothing has changed,” Matthew’s boyfriend said. “If anything, I’m bolder. I’m not being forced out of London.”

Ellen & George W. Bush were yukking it up while hanging out together at a football game